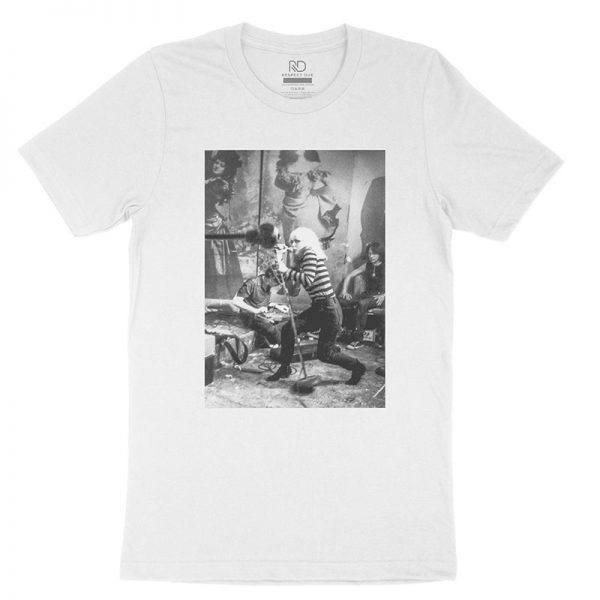 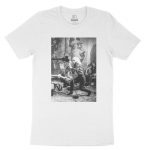 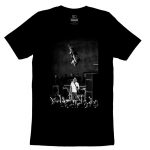 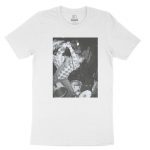 Kurt Cobain Unisex T-Shirt
0 out of 5
( There are no reviews yet. )

Welcome to the Respect Due family Blondie! We salute you.

Blondie is an American rock band founded by singer Debbie Harry and guitarist Chris Stein. The band were pioneers in the early American new wave and punk scenes of the mid-late 1970s. Its first two albums contained strong elements of these genres, and although successful in the United Kingdom and Australia, Blondie was regarded as an underground band in the United States until the release of Parallel Lines in 1978. Over the next three years, the band achieved several hit singles including “Heart of Glass“, “Call Me“, “Rapture” and “The Tide Is High” and became noted for its eclectic mix of musical styles incorporating elements of disco, pop, reggae, and early rap music.

Blondie disbanded after the release of its sixth studio album, The Hunter, in 1982. Debbie Harry continued to pursue a solo career with varied results after taking a few years off to care for partner Chris Stein, who was diagnosed with pemphigus, a rare autoimmune disease of the skin. The band re-formed in 1997, achieving renewed success and a number one single in the United Kingdom with “Maria” in 1999, exactly 20 years after their first UK No.1 single (“Heart of Glass”).

The group toured and performed throughout the world during the following years, and was inducted into the Rock and Roll Hall of Fame in 2006. Blondie has sold around 40 million records worldwide and is still active. The band’s tenth studio album, Ghosts of Download, was released in 2014 and their eleventh studio album, Pollinator, was released on May 5, 2017.

Inspired by the burgeoning new music scene at the Mercer Arts Center in Manhattan, Chris Stein sought to join a similar band. He joined the Stilettoes in 1973 as their guitarist and formed a romantic relationship with one of the band’s vocalists, Debbie Harry, a former waitress and Playboy Bunny. Harry had been a member of a folk-rock band, The Wind in the Willows, in the late 1960s. In July 1974, Stein and Harry parted ways with the Stilettoes and Elda Gentile, the band’s originator, forming a new band with ex-Stilettoes bandmates Billy O’Connor (drums; born October 4, 1953, Germany, died March 29, 2015, Pittsburgh, Pennsylvania) and Fred Smith (bass). Originally billed as Angel and the Snake for two shows in August 1974, they renamed themselves Blondie by October 1974. The name derived from comments made by truck drivers who catcalled “Hey, Blondie” to Harry as they drove past.

By the spring of 1975, after some personnel turnover (including Ivan Kral on guitar and sisters Tish Bellomo and Snooky Bellomo on backing vocals), Stein and Harry were joined by drummer Clem Burke and bass player Gary Valentine (real name Gary Lachman). Blondie became regular performers at Max’s Kansas City and CBGB. In June 1975, the band’s first recording came in the way of a demo produced by Alan Betrock. To fill out their sound, they recruited keyboard player Jimmy Destri in November 1975. The band signed with Private Stock Records and their debut album, Blondie, was issued in December 1976 but was initially not a commercial success. In September 1977, the band bought back its contract with Private Stock and signed with British label Chrysalis Records. The first album was re-released on the new label in October 1977. Rolling Stone‘s review of the debut album observed the eclectic nature of the group’s music, comparing it to Phil Spector and the Who, and commented that the album’s two strengths were Richard Gottehrer‘s production and the persona of Debbie Harry. The publication said she performed with “utter aplomb and involvement throughout: even when she’s portraying a character consummately obnoxious and spaced-out, there is a wink of awareness that is comforting and amusing yet never condescending.” It also noted that Harry was the “possessor of a bombshell zombie’s voice that can sound dreamily seductive and woodenly Mansonite within the same song”. 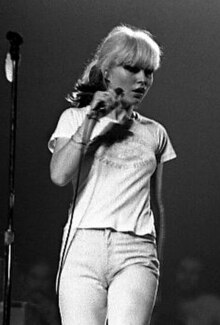 The band’s first commercial success occurred in Australia in 1977, when the music television program Countdown mistakenly played their video “In the Flesh“, which was the B-side of their then current single “X-Offender“. Jimmy Destri later credited the show’s Molly Meldrum for their initial success, commenting that “we still thank him to this day” for playing the wrong song. In a 1998 interview, drummer Clem Burke recalled seeing the episode in which the wrong song was played, but he and Chris Stein suggested that it may have been a deliberate subterfuge on the part of Meldrum. Stein asserted that “X-Offender” was “too crazy and aggressive [to become a hit]”, while “In the Flesh” was “not representative of any punk sensibility. Over the years, I’ve thought they probably played both things but liked one better. That’s all.” In retrospect, Burke described “In the Flesh” as “a forerunner to the power ballad“.

The single reached number 2 in Australia, while the album reached the Australian top twenty in November 1977, and a subsequent double-A release of “X-Offender” and “Rip Her to Shreds” reached number 81. A successful Australian tour followed in December, though it was marred by an incident in Brisbane when disappointed fans almost rioted after Harry cancelled a performance due to illness.

In February 1978, Blondie released their second album, Plastic Letters (UK No. 10, US No. 78, Australia No. 64). The album was recorded as a four-piece as Gary Valentine had left the band in mid 1977. Plastic Letters was promoted extensively throughout Europe and Asia by Chrysalis Records. The album’s first single, “Denis“, was a cover version of Randy and the Rainbows‘ 1963 hit. It reached number two on the British singles charts, while both the album and its second single, “(I’m Always Touched by Your) Presence, Dear“, reached the British top ten. Chart success, along with a successful 1978 UK tour, including a gig at London’s Roundhouse, made Blondie one of the first American new wave bands to achieve mainstream success in the United Kingdom. By this time, Gary Valentine had left and been replaced by Frank Infante (guitar, bass guitar). With this lineup in place for a short time, British musician Nigel Harrison was hired as the group’s full-time bassist, expanding Blondie to a six-piece for the first time in its history and thus allowing Infante to switch to guitar. The band’s line-up had stabilized.

Blondie’s third album, Parallel Lines (UK No. 1, US No. 6, Australia No. 2), was released in September 1978. Produced by Mike Chapman, it finally broke the band into the American market on the strength of the worldwide hit single “Heart of Glass“. Parallel Lines became the group’s most successful album, selling 20 million copies worldwide. The album’s first two singles were “Picture This” (UK No. 12) and “Hanging on the Telephone” (UK No. 5). Because the biggest hit from Blondie’s previous album Plastic Letters was “Denis”, a cover of Randy & The Rainbows’ 1963 song “Denise”, Chrysalis Records chose Buddy Holly‘s “I’m Gonna Love You Too” as the lead single from Parallel Lines in the United States. This turned out to be a miscalculation as the single failed to chart. The song was eventually released as a single in a few other countries in 1979.

“Heart of Glass” was released in early 1979 and the disco-infused track topped the UK charts in February 1979 and the US charts in April 1979. It was a reworking of a rock and reggae-influenced song that the group had performed since its formation in the mid 1970s, updated with strong elements of disco music. Clem Burke later said the revamped version was inspired partly by Kraftwerk and partly by the Bee Gees‘ “Stayin’ Alive“, whose drum beat Burke tried to emulate. He and Stein gave Jimmy Destri much of the credit for the final result, noting that Destri’s appreciation of technology had led him to introduce synthesizers and to rework the keyboard sections. Although some critics condemned Blondie for “selling out” by dabbling in disco, the song became a monumental worldwide success and became one of the biggest selling singles of 1979. The song was accompanied by a music video filmed at a club in New York City (incorrectly surmised as being Studio 54 due to a shot of its exterior at the start of the video). The music video showcased Harry’s hard-edged and playfully sexual character, as well as her famously stiff, marginally disinterested persona. She began to attain a celebrity status that set her apart from the other band members, who were largely ignored by the media.

Blondie’s next single in the US was a more aggressive rock song, “One Way or Another” (US No. 24), though in the UK, an alternate single choice, “Sunday Girl“, became a No. 1 hit.[21] Parallel Lines is ranked No. 140 on Rolling Stone’s list of 500 greatest albums of all time. In June 1979, Blondie, photographed by Annie Leibovitz, was featured on the cover of Rolling Stone magazine.

Blondie’s fourth album, Eat to the Beat (UK No. 1, US No. 17, Australia No. 9), was released in October 1979. Though well received by critics as a suitable follow-up to Parallel Lines, the album and its singles failed to achieve the same level of success in the US. In the UK, the album delivered three top 20 hits, including the band’s third UK number one (“Atomic”, UK No. 1, US No. 39). The lead track off the album, “Dreaming“, narrowly missed the top spot in the UK, but only made it to number 27 in the US. “Union City Blue” (UK No. 13) was not released in the US in favor of the track “The Hardest Part”. In a daring move, Chrysalis Records’ Linda Carhart asked Jon Roseman Productions US division to shoot videos for every song and make it the first ever video album. David Mallet directed and Paul Flattery produced it at various locations and studios in and around New York.

Blondie’s next single, the Grammy-nominated “Call Me“, was the result of Debbie Harry’s collaboration with the Italian songwriter and producer Giorgio Moroder, who had been responsible for Donna Summer‘s biggest hits. The track was recorded as the title theme of the Richard Gere film American Gigolo. Released in February 1980 in the US, “Call Me” spent six consecutive weeks at No. 1 in the US and Canada, reached No. 1 in the U.K. (where it was released in April 1980) and became a hit throughout the world. The single was also No. 1 on Billboard magazine’s 1980 year-end chart. In the summer of 1980, the band appeared in a bit part in the film Roadie starring Meat Loaf. Blondie performed the Johnny Cash song “Ring of Fire“. The live recording was featured on the film soundtrack, and on a later CD reissue of the Eat to the Beat album.

In November 1980, Blondie’s fifth studio album, Autoamerican (UK No. 3, US No. 7, Australia No. 8) was released; it contained two more No. 1 US hits: the reggae-styled “The Tide Is High“, a cover version of a 1967 song written by John Holt of the Paragons, and the rap-flavored “Rapture“, which was the first song featuring rapping to reach number one in the US. In the song Harry mentions the hip hop and graffiti artist Fab Five Freddy who also appears in the video for the song. Autoamerican featured a far wider stylistic range than previous Blondie albums, including the avant-garde instrumental “Europa”, the acoustic jazz of “Faces”, and “Follow Me” (from the Broadway show “Camelot“). The album went on to achieve platinum success in both the United States and the United Kingdom.

Blondie – Hanging On The Telephone

Be the first to review “Blondie Unisex T-Shirt” Cancel reply