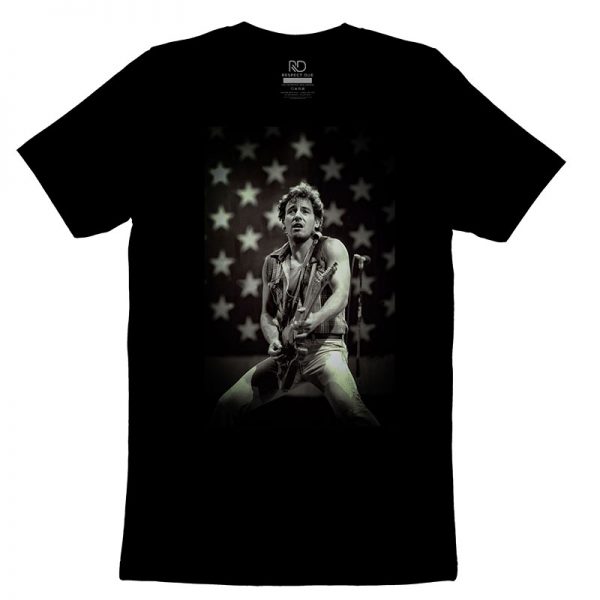 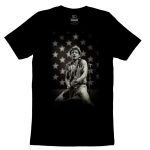 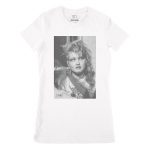 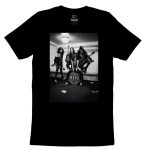 Welcome to the Respect Due family Bruce Springsteen! We salute you.


Bruce Frederick Joseph Springsteen (born September 23, 1949) is an American singer, songwriter, and musician who is both a solo artist and the leader of the E Street Band. He received critical acclaim for his early 1970s albums and attained worldwide fame upon the release of Born to Run in 1975. During a career that has spanned five decades, Springsteen has become known for his poetic and socially conscious lyrics and lengthy, energetic stage performances, earning the nickname “The Boss”. He has recorded both rock albums and folk-oriented works, and his lyrics often address the experiences and struggles of working-class Americans.

Born in the U.S.A. (1984) is Springsteen’s most critically acclaimed and commercially successful album, proving him to be one of the most successful rock figures of the 1980s. It was certified 15x Platinum in the US and has sold 30 million copies worldwide, making it one of the best-selling albums of all time. Seven of its singles reached the top 10 of the Billboard Hot 100 including the title track, which was a bitter commentary on the treatment of Vietnam veterans — some of whom were Springsteen’s friends. Advocating for the rights of the common working-class man, the song made a huge political impact.[2] Springsteen’s other best-known songs include “Born to Run” (1975), “Thunder Road” (1975), “Badlands” (1978), “Hungry Heart” (1980), “Dancing in the Dark” (1984), “Glory Days” (1985), “Brilliant Disguise” (1987), “Human Touch” (1992), “Streets of Philadelphia” (1994), and “The Rising” (2002).

Springsteen has sold more than 135 million records worldwide and more than 64 million records in the United States, making him one of the world’s best-selling music artists. He has earned numerous awards for his work, including 20 Grammy Awards, two Golden Globes, an Academy Award, and a Tony Award (for Springsteen on Broadway). Springsteen was inducted into both the Songwriters Hall of Fame and the Rock and Roll Hall of Fame in 1999, received the Kennedy Center Honors in 2009, was named MusiCares person of the year in 2013, and was awarded the Presidential Medal of Freedom by President Barack Obama in 2016.

On August 13, 1975, Springsteen and the E Street Band began a five-night, 10-show stand at New York’s The Bottom Line club. This attracted major media attention and was broadcast live on WNEW-FM. Decades later, Rolling Stone magazine would name the stand as one of the 50 Moments That Changed Rock and Roll.

Born to Run was released on August 25, 1975. It proved to be a breakthrough album that catapulted Springsteen to worldwide fame. The album peaked at No. 3 on the Billboard 200, and while reception at US top 40 radio outlets for the album’s two singles was not overwhelming (“Born to Run” reached a modest No. 23 on the Billboard charts, and “Tenth Avenue Freeze-Out” peaked at No. 83), almost every track on the album received album-oriented rock airplay, especially “Born to Run”, “Thunder Road“, “Tenth Avenue Freeze-Out,” and “Jungleland“, all of which remain perennial favorites on many classic rock stations. In October 1975, Springsteen appeared on the covers of both Newsweek and Time in the same week. So great did the wave of publicity become that he eventually rebelled against it during his first venture overseas, tearing down promotional posters before a concert appearance in London.

A legal battle with former manager Mike Appel kept Springsteen out of the studio for nearly a year, during which time he kept the E Street Band together through extensive touring across the U.S. Despite the optimistic fervor with which he often performed, Springsteen’s new songs sounded more somber than much of his previous work. Reaching settlement with Appel in 1977, Springsteen returned to the studio, and the subsequent sessions produced Darkness on the Edge of Town (1978). Musically, this album was a turning point in Springsteen’s career. Gone were the raw, rapid-fire lyrics, outsized characters, and long, multi-part musical compositions of the first three albums; the songs were leaner and more carefully drawn and began to reflect Springsteen’s growing intellectual and political awareness. The cross-country 1978 tour to promote the album would become legendary for the intensity and length of its shows.

By the late 1970s, Springsteen had earned a reputation in the pop world as a songwriter whose material could provide hits for other bands. Manfred Mann’s Earth Band had achieved a US No. 1 pop hit with a heavily rearranged version of Greetings‘ “Blinded by the Light” in early 1977. Patti Smith reached No. 13 with her take on Springsteen’s unreleased “Because the Night” (with revised lyrics by Smith) in 1978, while The Pointer Sisters hit No. 2 in 1979 with Springsteen’s also unreleased “Fire“. Between 1976-1978, Springsteen provided four compositions to Southside Johnny & the Asbury Jukes, including “The Fever” and “Hearts of Stone”, and collaborated on four more with Steven Van Zandt, producer of their first three albums.

In September 1979, Springsteen and the E Street Band joined the Musicians United for Safe Energy anti-nuclear power collective at Madison Square Garden for two nights, playing an abbreviated set while premiering two songs from his upcoming album. The subsequent No Nukes live album, as well as the following summer’s No Nukes documentary film, represented the first official recordings and footage of Springsteen’s fabled live act, as well as Springsteen’s first tentative dip into political involvement.[citation needed]

Springsteen continued to focus on working-class life with the 20-song double album The River in 1980, which included an intentionally paradoxical range of material from good-time party rockers to emotionally intense ballads, and finally yielded his first hit Top Ten single as a performer, “Hungry Heart“.[50] The album sold well, becoming his first No. 1 on the Billboard Pop Albums chart.[citation needed][51]

The River was followed in 1982 by the stark solo acoustic Nebraska. According to the Marsh biographies, Springsteen was depressed when he wrote this material, and the result is a brutal depiction of American life. While Nebraska did not sell as well as Springsteen’s three previous albums, it garnered widespread critical praise (including being named “Album of the Year” by Rolling Stone magazine’s critics) and influenced later works by other major artists, including U2‘s album The Joshua Tree.

Springsteen is probably best known for his album Born in the U.S.A. (1984), which sold 15 million copies in the U.S., 30 million worldwide, and became one of the best-selling albums of all time with seven singles hitting the Top 10. The title track was a bitter commentary on the treatment of Vietnam veterans, some of whom were Springsteen’s friends. The lyrics in the verses were entirely unambiguous when listened to, but the anthemic music and the title of the song made it hard for many, from politicians to the common person, to get the lyrics—except those in the chorus, which could be read many ways. The song made a huge political impact, as he was advocating for the rights of the common working-class man.

The song was widely misinterpreted as jingoistic, and in connection with the 1984 presidential campaign became the subject of considerable folklore. In 1984, conservative columnist George Will attended a Springsteen concert and then wrote a column praising Springsteen’s work ethic. Six days after the column was printed, in a campaign rally in Hammonton, New Jersey, Reagan said, “America’s future rests in a thousand dreams inside your hearts. It rests in the message of hope in the songs of a man so many young Americans admire—New Jersey’s own, Bruce Springsteen.” Two nights later, at a concert in Pittsburgh, Springsteen told the crowd, “Well, the president was mentioning my name in his speech the other day and I kind of got to wondering what his favorite album of mine must’ve been, you know? I don’t think it was the Nebraska album. I don’t think he’s been listening to this one.” He then began playing “Johnny 99”, with its allusions to closing factories and criminals.

“Dancing in the Dark” was the biggest of seven hit singles from Born in the U.S.A., peaking at No. 2 on the Billboard music charts. The video for the song showed a young Courteney Cox dancing on stage with Springsteen, which helped start the actress’s career. The song “Cover Me” was written by Springsteen for Donna Summer, but his record company persuaded him to keep it for the new album. A big fan of Summer’s work, Springsteen wrote another song for her, “Protection“. Videos for the album were directed by Brian De Palma and John Sayles. Springsteen played on the “We Are the World” song and album in 1985. His live single “Trapped” from that album received moderate airplay on US Top 40 stations as well as reaching No. 1 on the Billboard Top Rock Tracks chart. 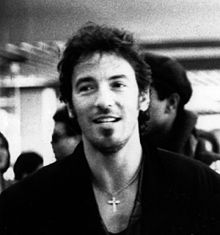 The Born in the U.S.A. period represented the height of Springsteen’s visibility in popular culture and the broadest audience he would ever reach (aided by the release of Arthur Baker‘s dance mixes of three of the singles). From June 15 to August 10, 1985, all seven of his albums appeared on the UK Albums Chart: the first time an artist had charted their entire back catalogue simultaneously.

Live/1975–85, a five-record box set (also on three cassettes or three CDs), was released near the end of 1986 and became the first box set to debut at No. 1 on the U.S. album charts. It is one of the most commercially successful live albums of all time, ultimately selling 13 million units in the U.S. During the 1980s, several Springsteen fanzines were launched, including Backstreets magazine.

Springsteen released the much more sedate and contemplative Tunnel of Love album in 1987. The album is a mature reflection on the many faces of love found, lost and squandered, which only selectively used the E Street Band.

On July 19, 1988, Springsteen held a concert in East Germany that attracted 300,000 spectators. Journalist Erik Kirschbaum has called the concert “the most important rock concert ever, anywhere”, in his 2013 book Rocking the Wall. Bruce Springsteen: The Berlin Concert That Changed the World. It had been conceived by the Socialist Unity Party‘s youth wing in an attempt to placate the youth of East Germany, who were hungry for more freedom and the popular music of the West. However, it is Kirschbaum’s opinion that the success of the concert catalyzed opposition to the regime in the DDR, and helped contribute to the fall of the Berlin Wall the following year.

Bruce Springsteen – Dancing In the Dark