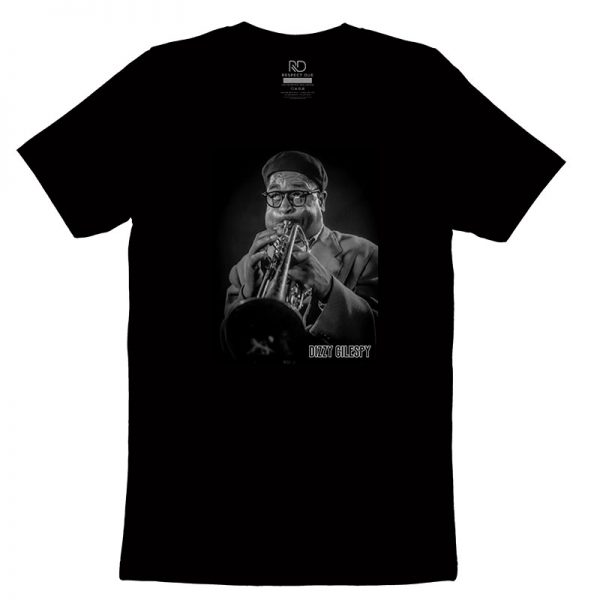 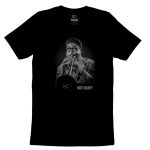 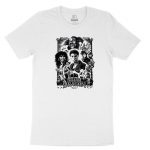 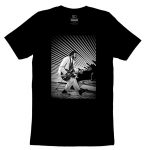 Chuck Berry Unisex T-Shirt
0 out of 5
( There are no reviews yet. )

Welcome to the Respect Due family the Dizzy Gillespie! We salute you.

Gillespie was a trumpet virtuoso and improviser, building on the virtuoso style of Roy Eldridge but adding layers of harmonic and rhythmic complexity previously unheard in jazz. His combination of musicianship, showmanship, and wit made him a leading popularizer of the new music called bebop. His beret and horn-rimmed spectacles, his scat singing, his bent horn, pouched cheeks, and his light-hearted personality provided some of bebop’s most prominent symbols.

In the 1940s Gillespie, with Charlie Parker, became a major figure in the development of bebop and modern jazz.

The youngest of nine children of Lottie and James Gillespie, Dizzy Gillespie was born in Cheraw, South Carolina  His father was a local bandleader, so instruments were made available to the children. Gillespie started to play the piano at the age of four. Gillespie’s father died when he was only ten years old. He taught himself how to play the trombone as well as the trumpet by the age of twelve. From the night he heard his idol, Roy Eldridge, on the radio, he dreamed of becoming a jazz musician.

He won a music scholarship to the Laurinburg Institute in North Carolina which he attended for two years before accompanying his family when they moved to Philadelphia in 1935.

Gillespie’s first professional job was with the Frank Fairfax Orchestra in 1935, after which he joined the respective orchestras of Edgar Hayes and later Teddy Hill, replacing Frankie Newton as second trumpet in May 1937. Teddy Hill’s band was where Gillespie made his first recording, “King Porter Stomp”. In August 1937 while gigging with Hayes in Washington D.C., Gillespie met a young dancer named Lorraine Willis who worked a Baltimore–Philadelphia–New York City circuit which included the Apollo Theater. Willis was not immediately friendly but Gillespie was attracted anyway. The two married on May 9, 1940.

Gillespie stayed with Teddy Hill’s band for a year, then left and freelanced with other bands. In 1939, with the help of Willis, Gillespie joined Cab Calloway‘s orchestra. He recorded one of his earliest compositions, “Pickin’ the Cabbage”, with Calloway in 1940. After an altercation between the two, Calloway fired Gillespie in late 1941. The incident is recounted by Gillespie and Calloway’s band members Milt Hinton and Jonah Jones in Jean Bach‘s 1997 film, The Spitball Story. Calloway disapproved of Gillespie’s mischievous humor and his adventuresome approach to soloing. According to Jones, Calloway referred to it as “Chinese music”. During rehearsal, someone in the band threw a spitball. Already in a foul mood, Calloway blamed Gillespie, who refused to take the blame. Gillespie stabbed Calloway in the leg with a knife. Calloway had minor cuts on the thigh and wrist. After the two were separated, Calloway fired Gillespie. A few days later, Gillespie tried to apologize to Calloway, but he was dismissed.

During his time in Calloway’s band, Gillespie started writing big band music for Woody Herman and Jimmy Dorsey. He then freelanced with a few bands, most notably Ella Fitzgerald‘s orchestra, composed of members of the Chick Webb‘s band.

Gillespie did not serve in World War II. At his Selective Service interview, he told the local board, “in this stage of my life here in the United States whose foot has been in my ass?” and “So if you put me out there with a gun in my hand and tell me to shoot at the enemy, I’m liable to create a case of ‘mistaken identity’ of who I might shoot.” He was classified 4-F. In 1943, he joined the Earl Hines band. Composer Gunther Schuller said,

… In 1943 I heard the great Earl Hines band which had Bird in it and all those other great musicians. They were playing all the flatted fifth chords and all the modern harmonies and substitutions and Gillespie runs in the trumpet section work. Two years later I read that that was ‘bop’ and the beginning of modern jazz … but the band never made recordings.

Gillespie said of the Hines band, “[p]eople talk about the Hines band being ‘the incubator of bop’ and the leading exponents of that music ended up in the Hines band. But people also have the erroneous impression that the music was new. It was not. The music evolved from what went before. It was the same basic music. The difference was in how you got from here to here to here … naturally each age has got its own shit.”

Gillespie joined the big band of Hines’ long-time collaborator Billy Eckstine, and it was as a member of Eckstine’s band that he was reunited with Charlie Parker, a fellow member. In 1945, Gillespie left Eckstine’s band because he wanted to play with a small combo. A “small combo” typically comprised no more than five musicians, playing the trumpet, saxophone, piano, bass and drums. 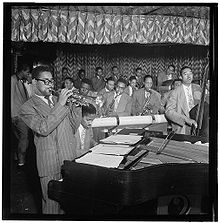 Gillespie with John Lewis, Cecil Payne, Miles Davis, and Ray Brown, between 1946 and 1948

Bebop was known as the first modern jazz style. However, it was unpopular in the beginning and was not viewed as positively as swing music was. Bebop was seen as an outgrowth of swing, not a revolution. Swing introduced a diversity of new musicians in the bebop era like Charlie Parker, Thelonious Monk, Bud Powell, Kenny Clarke, Oscar Pettiford, and Gillespie. Through these musicians, a new vocabulary of musical phrases was created. With Parker, Gillespie jammed at famous jazz clubs like Minton’s Playhouse and Monroe’s Uptown House. Parker’s system also held methods of adding chords to existing chord progressions and implying additional chords within the improvised lines

Gillespie compositions like “Groovin’ High“, “Woody ‘n’ You“, and “Salt Peanuts” sounded radically different, harmonically and rhythmically, from the swing music popular at the time. “A Night in Tunisia“, written in 1942, while he was playing with Earl Hines’ band, is noted for having a feature that is common in today’s music: a syncopated bass line. “Woody ‘n’ You” was recorded in a session led by Coleman Hawkins with Gillespie as a featured sideman on February 16, 1944 (Apollo), the first formal recording of bebop. He appeared in recordings by the Billy Eckstine band and started recording prolifically as a leader and sideman in early 1945. He was not content to let bebop sit in a niche of small groups in small clubs. A concert by one of his small groups in New York’s Town Hall on June 22, 1945 presented bebop to a broad audience; recordings of it were released in 2005. He started to organize big bands in late 1945. Dizzy Gillespie and his Bebop Six, which included Parker, started an extended gig at Billy Berg’s club in Los Angeles in December 1945. Reception was mixed and the band broke up. In February 1946 he signed a contract with Bluebird, gaining the distribution power of RCA for his music. He and his big band headlined the 1946 film Jivin’ in Be-Bop. 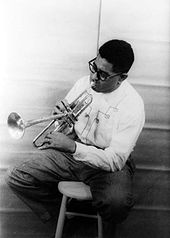 After his work with Parker, Gillespie led other small combos (including ones with Milt Jackson, John Coltrane, Lalo Schifrin, Ray Brown, Kenny Clarke, James Moody, J.J. Johnson, and Yusef Lateef) and put together his successful big bands starting in 1947. He and his big bands, with arrangements provided by Tadd Dameron, Gil Fuller, and George Russell, popularized bebop and made him a symbol of the new music.

His big bands of the late 1940s also featured Cuban rumberos Chano Pozo and Sabu Martinez, sparking interest in Afro-Cuban jazz. He appeared frequently as a soloist with Norman Granz‘s Jazz at the Philharmonic.

Gillespie and his Bee Bop Orchestra was the featured star of the 4th Cavalcade of Jazz concert held at Wrigley Field in Los Angeles which was produced by Leon Hefflin, Sr. on September 12, 1948. The young maestro had recently returned from Europe where his music rocked the continent. The program description noted “the musicianship, inventive technique, and daring of this young man has created a new style, which can be defined as off the chord solo gymnastics.” Also on the program that day were Frankie Laine, Little Miss Cornshucks, The Sweethearts of Rhythm, The Honeydrippers, Big Joe Turner, Jimmy Witherspoon, The Blenders, and The Sensations.

In 1948, Gillespie was involved in a traffic accident when the bicycle he was riding was bumped by an automobile. He was slightly injured and found that he could no longer hit the B-flat above high C. He won the case, but the jury awarded him only $1000 in view of his high earnings up to that point.

On January 6, 1953, he threw a party for his wife Lorraine at Snookie’s, a club in Manhattan, where his trumpet’s bell got bent upward in an accident, but he liked the sound so much he had a special trumpet made with a 45 degree raised bell, becoming his trademark.

In 1956 Gillespie organized a band to go on a State Department tour of the Middle East which was well-received internationally and earned him the nickname “the Ambassador of Jazz”. During this time, he also continued to lead a big band that performed throughout the United States and featured musicians including Pee Wee Moore and others. This band recorded a live album at the 1957 Newport jazz festival that featured Mary Lou Williams as a guest artist on piano.

In the late 1940s, Gillespie was involved in the movement called Afro-Cuban music, bringing Afro-Latin American music and elements to greater prominence in jazz and even pop music, particularly salsa. Afro-Cuban jazz is based on traditional Afro-Cuban rhythms. Gillespie was introduced to Chano Pozo in 1947 by Mario Bauza, a Latin jazz trumpet player. Chano Pozo became Gillespie’s conga drummer for his band. Gillespie also worked with Mario Bauza in New York jazz clubs on 52nd Street and several famous dance clubs such as the Palladium and the Apollo Theater in Harlem. They played together in the Chick Webb band and Cab Calloway’s band, where Gillespie and Bauza became lifelong friends. Gillespie helped develop and mature the Afro-Cuban jazz style. Afro-Cuban jazz was considered bebop-oriented, and some musicians classified it as a modern style. Afro-Cuban jazz was successful because it never decreased in popularity and it always attracted people to dance.

Gillespie’s most famous contributions to Afro-Cuban music are “Manteca” and “Tin Tin Deo” (both co-written with Chano Pozo); he was responsible for commissioning George Russell‘s “Cubano Be, Cubano Bop”, which featured Pozo. In 1977, Gillespie met Arturo Sandoval during a jazz cruise to Havana. Sandoval toured with Gillespie and defected in Rome in 1990 while touring with Gillespie and the United Nations Orchestra.