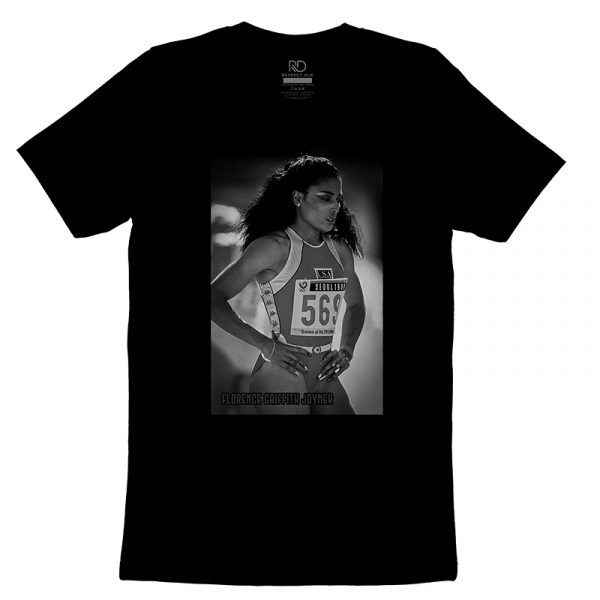 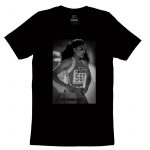 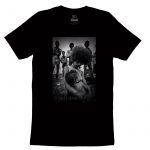 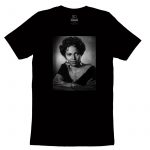 Dorothy Dandridge Unisex T-Shirt
0 out of 5
( There are no reviews yet. )

Welcome to the Respect Due family Florence Griffith Joyner! We salute you.

FEATS OF FITNESS | The Fastest Woman Of All Time

Florence Delorez Griffith Joyner (born Florence Delorez Griffith; December 21, 1959 – September 21, 1998), also known as Flo-Jo, was an American track and field athlete. She is the fastest woman of all time; the world records she set in 1988 for both the 100 m and 200 m still stand. During the late 1980s she became a popular figure due to both her record-setting athleticism and eclectic personal style.

Griffith-Joyner was born and raised in California. She was athletic from a young age and began running track meets as a child. While attending California State University, Northridge (CSUN) and University of California, Los Angeles (UCLA), she continued to compete in track and field. While still in college, Griffith-Joyner qualified for the 100 m 1980 Olympics, although she did not actually compete due to the U.S. boycott. She made her Olympic debut four years later, winning a silver medal in the 200 meter distance at the 1984 Olympics held in Los Angeles. At the 1988 U.S. Olympic trials, Griffith set a new world record in the 100 meter sprint. She went on to win three gold medals at the 1988 Olympics.

In February 1989, she abruptly retired. After her retirement from athletics, Griffith-Joyner remained a pop culture figure through endorsement deals, acting, and designing. She died in her sleep as the result of an epileptic seizure in 1998 at the age of 38.

Griffith attended the California State University at Northridge, and was on the track team coached by Bob Kersee. This team, which included Brown and Jeanette Bolden, won the national championship during Griffith’s first year of college. However, Griffith had to drop out to support her family, taking a job as a bank teller. Kersee found financial aid for Griffith and she returned to college in 1980, this time at University of California at Los Angeles (UCLA) where Kersee was working as a coach.

Brown, Bolden, and Griffith qualified for the 100-meter final at the trials for the 1980 Summer Olympics (with Brown winning and Griffith finishing last in the final). Griffith also ran the 200 meters, narrowly finishing fourth, a foot out of a qualifying position. However, the U.S. Government had already decided to boycott those Olympic Games mooting those results. In 1983, Griffith graduated from UCLA with her bachelor’s degree in psychology.

Griffith finished fourth in the 200-meter sprint at the first World Championship in Athletics in 1983. The following year, Griffith qualified for the Olympics in the 200-meter distance with the second fastest time at the United States Olympic Trials, held in Los Angeles. Evelyn Ashford, another UCLA alumnus and early favorite to medal, dropped out of the 200-meter due to injury. Griffith went on to win a silver medal in the 1984 Summer Olympics.

After the 1984 Olympic Games, she spent less time running. Griffith continued to run part-time, winning the 100-meter IAAF Grand Prix Final with the time of 11.00 seconds. She did not compete at the 1985 U.S. National Championship. That same year, she returned to working at a bank and styled hair and nails in her spare time. She married Al Joyner, the Olympic triple jump champion of 1984, in 1987.

She returned to athletics in April 1987. Four months later at the 1987 World Championships in Rome, Griffith-Joyner finished second in the 200 meter sprint. Her success during the 1987 season resulted in being ranked second in Track and Field News‘ 1987 world rankings. The 200-meter remained a stronger event for Griffith-Joyner than the 100-meter, where she was ranked seventh in the United States.

Before the 1988 U.S. Olympic Trials, Griffith-Joyner continued to work with her coach, and now brother in law, Kersee two days a week, but with her new husband coaching her three days a week. She ran the 100 meter in 10.96-second at the 1987 Cologne Grand Prix Track and Field Meet, a personal best but the mark was not even in the top 40 of all time. She continued to improve, again setting a personal best in the 100 meters in San Diego on June 25, 1988, but still remained shy of then American record holder Evelyn Ashford’s three best times. A week before the trials she ran a tune-up race in 10.99 in Santa Monica.

In the first race of the quarterfinals of the U.S. Olympic Trials, she stunned her colleagues when she sprinted 100 meters in 10.49 seconds, a new world record. Over the two day trials, Griffith-Joyner recorded the three fastest times for a woman at 100 meters: 10.49 in the quarter-final, 10.70 in the semi-final, and 10.61 in the finals. At the same Olympic trials Griffith-Joyner also set an American record at the 200-meter distance with a time of 21.77 seconds.

The extraordinary result raised the possibility of a technical malfunction with the wind gauge which read at 0.0 m/s – a reading which was at complete odds to the windy conditions on the day with high wind speeds being recorded in all other sprints before and after this race as well as the parallel long jump runway at the time of the Griffith-Joyner performance. All scientific studies commissioned by the IAAF and independent organisations have since confirmed there was an illegal tailwind of between 5 m/s – 7 m/s at the time. This should have annulled the legality of this result, although the IAAF has chosen not to take this course of action. The legitimate next best wind legal performance would therefore be Griffith-Joyner’s 10.61s performance in the final the next day.

Since 1997 the International Athletics Annual of the Association of Track and Field Statisticians has listed this performance as “probably strongly wind assisted, but recognized as a world record”.

Following the Olympic trials, in late July 1988, Griffith-Joyner left coach Kersee saying she wanted a coach able to provide more personal attention. Another contributing factor was Griffith-Joyner’s unhappiness with the lack of sponsorship and endorsement opportunities. In addition to serving as coach, Kersee was Griffith-Joyner’s manager, as he required all the athletes he coached to use his management services too. Griffith-Joyner’s decision to sign with personal manager Gordon Baskin therefore necessitated the coaching change. Griffith Joyner left UCLA for UC Irvine with her husband serving as full-time coach.

By now known to the world as “Flo-Jo”, Griffith-Joyner was the big favorite for the titles in the sprint events at the 1988 Summer Olympics. In the 100-meter final, she ran a 10.54, beating her nearest rival, Evelyn Ashford, by 0.30 seconds. In the 200 meter semifinal, she set the world record of 21.56 seconds and then broke this record, winning the final by 0.22 seconds with a time of 21.34 seconds.

Comeback attempt and other activities

Griffith-Joyner’s success at the 1988 Olympics led to new opportunities. In the weeks following the Olympics, Griffith-Joyner earned millions of dollars from endorsement deals, primarily in Japan. Griffith-Joyner also signed a deal with toy maker LJN Toys for a Barbie-like doll in her likeness.

Among the things she did away from the track was to design the basketball uniforms for the Indiana Pacers NBA team in 1989. She served as co-chair of President’s Council on Physical Fitness. She made a guest appearance as herself on a season 4 episode of 227. Griffith-Joyner appeared in the soap opera Santa Barbara in 1992, as “Terry Holloway”, a photographer similar to Annie Leibovitz.

In 1996, Griffith-Joyner appeared on Charlie Rose and announced her comeback to competitive athletics, concentrating on the 400-meter run. Her reason was that she had already set world marks in both the 100 m and 200 m events, with the 400 m world record being her goal. Griffith-Joyner trained steadily leading up to the U.S. Olympic trials in June. However, tendinitis in her right leg ended her hopes of becoming a triple-world-record holder. Al Joyner also attempted a comeback, but he was unable to compete due to an injured quadriceps muscle.