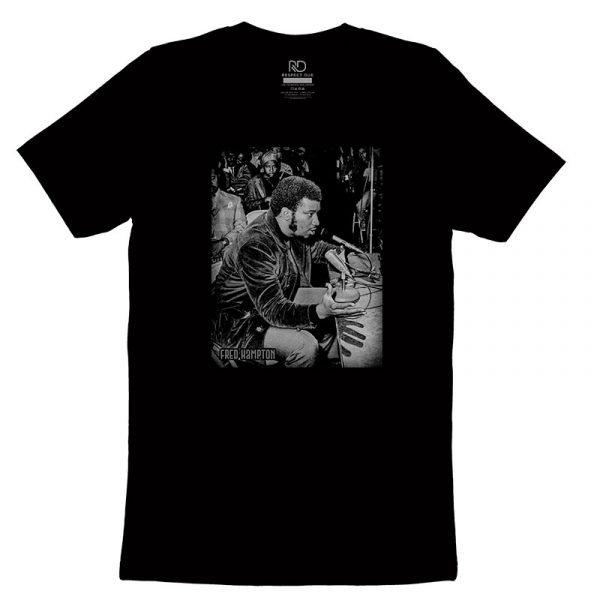 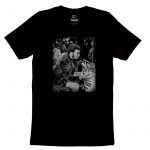 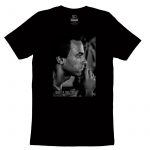 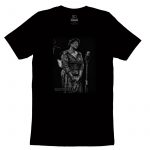 Ella Fitzgerald Unisex T-Shirt
0 out of 5
( There are no reviews yet. )

Welcome to the Respect Due family the Fred Hampton! We salute you.

Fredrick Allen Hampton (August 30, 1948 – December 4, 1969) was an American activist, Marxist-Leninist and revolutionary socialist. He came to prominence in Chicago as chairman of the Illinois chapter of the Black Panther Party (BPP), and deputy chairman of the national BPP. In this capacity, he founded the Rainbow Coalition, a prominent multicultural political organization that initially included the Black Panthers, Young Patriots, and the Young Lords, and an alliance among major Chicago street gangs to help them end infighting and work for social change.

In 1967, Hampton was identified by the Federal Bureau of Investigation (FBI) as a radical threat. The FBI tried to subvert his activities in Chicago, sowing disinformation among black progressive groups and placing a counterintelligence operative in the local Panthers. In December 1969, Hampton was shot and killed in his bed during a predawn raid at his Chicago apartment by a tactical unit of the Cook County State’s Attorney’s Office in conjunction with the Chicago Police Department and the FBI; during the raid, Panther Mark Clark was also killed and several others were seriously wounded. In January 1970, a coroner’s jury held an inquest and ruled the deaths of Hampton and Clark to be justifiable homicide.

A civil lawsuit was later filed on behalf of the survivors and the relatives of Hampton and Clark. It was resolved in 1982 by a settlement of $1.85 million; the City of Chicago, Cook County, and the federal government each paid one-third to a group of nine plaintiffs. Given revelations about the illegal COINTELPRO program and documents associated with the killings, many scholars now consider Hampton’s death an assassination under the FBI’s initiative.

Hampton was born on August 30, 1948, in present-day Summit, Illinois, and moved with his parents to Maywood ten years later, where he grew up — both suburbs of Chicago. His parents had moved north from Louisiana, as part of the Great Migration of African Americans in the early 20th century out of the South. They both worked at the Argo Starch Company. As a youth, Hampton was gifted both in the classroom and athletically, and he hoped to play center field for the New York Yankees. At 10 years old, he started hosting weekend breakfasts for other children from the neighborhood, cooking the meals himself in what could be described as a precursor to the Panthers’ free breakfast program. In high school, he led walkouts protesting the exclusion of black students from the race for homecoming queen and calling on officials to hire more black teachers and administrators. Hampton graduated from Proviso East High School with honors and varsity letters and a Junior Achievement Award in 1966 and enrolled at Triton Junior College in nearby River Grove, Illinois, where he majored in pre-law. He planned to become more familiar with the legal system to use it as a defense against police. When he and fellow Black Panthers later followed police in his community supervision program, watching out for police brutality, they used his knowledge of law as a defense.

In 1966, one year after the beginning of Operation Rolling Thunder, that involved the bombing of North Vietnam, Fred Hampton turned eighteen. At that time, Hampton started identifying with the Third World socialist struggles, as well as reading communist revolutionaries Che Guevera, Ho Chi Minh and Mao Zedong. Shortly after, Hampton urged not only for peace in Vietnam, but also Vietnam’s victory.

Hampton became active in the National Association for the Advancement of Colored People (NAACP) and assumed leadership of its West Suburban Branch’s Youth Council. In his capacity as an NAACP youth organizer, he began to demonstrate natural leadership abilities; from a community of 27,000, he was able to muster a youth group 500-members strong. He worked to get more and better recreational facilities established in the neighborhoods and to improve educational resources for Maywood’s impoverished black community.

In the late 60’s, Fred Hampton was charged for stealing 71 dollars worth of ice cream bars and giving them to kids in the street.

We got to face some facts. That the masses are poor, that the masses belong to what you call the lower class, and when I talk about the masses, I’m talking about the white masses, I’m talking about the black masses, and the brown masses, and the yellow masses, too. We’ve got to face the fact that some people say you fight fire best with fire, but we say you put fire out best with water. We say you don’t fight racism with racism. We’re gonna fight racism with solidarity. We say you don’t fight capitalism with no black capitalism; you fight capitalism with socialism”

About the same time that Hampton was successfully organizing young African Americans for the NAACP, the Black Panther Party (BPP) was rising to national prominence. Hampton was quickly attracted to the Black Panthers’ approach, which was based on a Ten-Point Program that integrated black self-determination with class and economic critique from Maoism. Hampton joined the Party and relocated to downtown Chicago. In November 1968 he joined the Party’s nascent Illinois chapter, founded in late 1967 by Bob Brown, a Student Nonviolent Coordinating Committee (SNCC) organizer.

Over the next year, Hampton and his friends and associates made a number of significant achievements in Chicago. Perhaps his most important was his brokering of a nonaggression pact among Chicago’s most powerful street gangs. Emphasizing that racial and ethnic conflict among gangs would only keep its members entrenched in poverty, Hampton strove to forge a class-conscious, multiracial alliance among the BPP, the Young Patriots Organization, and the Young Lords under the leadership of Jose Cha Cha Jimenez, leading to the Rainbow Coalition.

Hampton met the Young Lords in Chicago’s Lincoln Park neighborhood the day after they were in the news for occupying a police community workshop at the Chicago 18th District Police Station. He was arrested twice with Jimenez at the Wicker Park Welfare Office, and both were charged with “mob action” at a peaceful picket of the office. Later, the Rainbow Coalition was joined nationwide by Students for a Democratic Society (SDS), the Brown Berets, A.I.M., and the Red Guard Party. In May 1969, Hampton called a press conference to announce that this “rainbow coalition” had formed. What the coalition groups would do was based on common action. Some of these included poverty, anti-racism, corruption, police brutality, and substandard housing. If there was a protest or a demonstration, the groups would go out, come to the event, and support each other.

Hampton rose quickly in the Black Panthers, based on his organizing skills, substantial oratorical gifts, and personal charisma. Once he became leader of the Chicago chapter, he organized weekly rallies, participated in strikes, worked closely with the BPP’s local People’s Clinic, taught political education classes every morning at 6am, and launched a project for community supervision of the police. Hampton was also instrumental in the BPP’s Free Breakfast Program. When Bob Brown left the Party with Kwame Ture, in the FBI-fomented SNCC/Panther split, Hampton assumed chairmanship of the Illinois state BPP. This automatically made him a national BPP deputy chairman. As the nationwide Panther leadership began to be decimated by the effects of the FBI’s COINTELPRO, Hampton’s prominence in the national hierarchy increased rapidly and dramatically. Eventually he was in line to be appointed to the Party’s Central Committee’s Chief of Staff. He would have achieved this position had he not been killed on December 4, 1969.

Fred Hampton – On The Importance Of Education Prior To Action