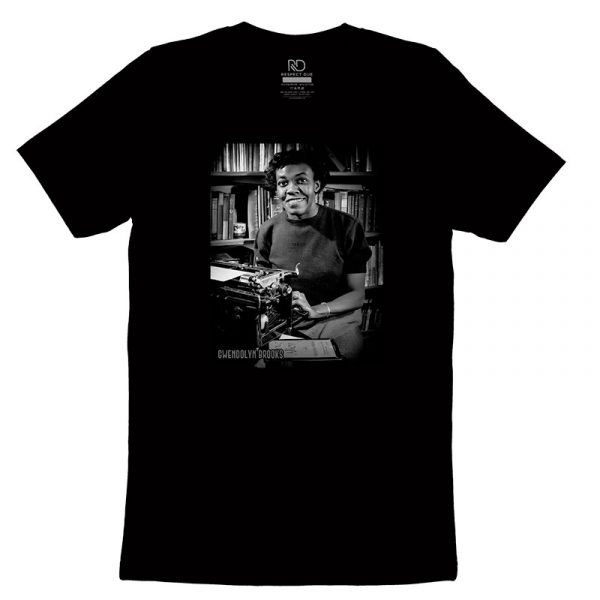 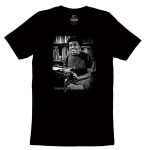 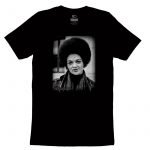 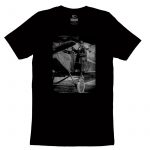 Bessie Coleman Unisex T-Shirt
0 out of 5
( There are no reviews yet. )

Welcome to the Respect Due family the Gwendolyn Brooks! We salute you.

Gwendolyn Elizabeth Brooks (June 7, 1917 – December 3, 2000) was an American poet, author, and teacher. Her work often dealt with the personal celebrations and struggles of ordinary people in her community. She won the Pulitzer Prize for Poetry on May 1, 1950, for Annie Allen, making her the first African American to receive a Pulitzer Prize.

Throughout her prolific writing career, Brooks received many more honors. A lifelong resident of Chicago, she was appointed Poet Laureate of Illinois in 1968, a position she held until her death 32 years later. She was also named the Poet Laureate Consultant in Poetry to the Library of Congress for the 1985–86 term. In 1976, she became the first African-American woman inducted into the American Academy of Arts and Letters.

Brooks published her first poem, “Eventide”, in a children’s magazine, American Childhood, when she was 13 years old. By the age of 16, she had already written and published approximately 75 poems. At 17, she started submitting her work to “Lights and Shadows,” the poetry column of the Chicago Defender, an African-American newspaper. Her poems, many published while she attended Wilson Junior College, ranged in style from traditional ballads and sonnets to poems using blues rhythms in free verse. In her early years, she received commendations on her poetic work and encouragement from James Weldon Johnson, Richard Wright and Langston Hughes. James Weldon Johnson sent her the first critique of her poems when she was only sixteen years old.

Her characters were often drawn from the inner city life that Brooks knew well. She said, “I lived in a small second-floor apartment at the corner, and I could look first on one side and then the other. There was my material.”

By 1941, Brooks was taking part in poetry workshops. A particularly influential one was organized by Inez Cunningham Stark, an affluent white woman with a strong literary background. Stark offered writing workshops at the new South Side Community Art Center, which Brooks attended. It was here she gained momentum in finding her voice and a deeper knowledge of the techniques of her predecessors. Renowned poet Langston Hughes stopped by the workshop and heard her read “The Ballad of Pearl May Lee”. In 1944, she achieved a goal she had been pursuing through continued unsolicited submissions since she was 14 years old: two of her poems were published in Poetry magazine’s November issue. In the autobiographical information she provided to the magazine, she described her occupation as a “housewife”.

Brooks’ published her first book of poetry, A Street in Bronzeville (1945), with Harper & Brothers, after a strong show of support to the publisher from author Richard Wright. He said to the editors who solicited his opinion on Brooks’ work:

There is no self-pity here, not a striving for effects. She takes hold of reality as it is and renders it faithfully. … She easily catches the pathos of petty destinies; the whimper of the wounded; the tiny accidents that plague the lives of the desperately poor, and the problem of color prejudice among Negroes.

The book earned instant critical acclaim for its authentic and textured portraits of life in Bronzeville. Brooks later said it was a glowing review by Paul Engle in the Chicago Tribune that “initiated My Reputation”. Engle stated that Brooks’ poems were no more “Negro poetry” than Robert Frost’s work was “white poetry”. Brooks received her first Guggenheim Fellowship in 1946 and was included as one of the “Ten Young Women of the Year” in Mademoiselle magazine.

Brooks’ second book of poetry, Annie Allen (1949), focused on the life and experiences of a young Black girl growing into womanhood in the Bronzeville neighborhood of Chicago. The book was awarded the 1950 Pulitzer Prize for poetry, and was also awarded Poetry magazine’s Eunice Tietjens Prize.

In 1953, Brooks published her first and only narrative book, a novella titled Maud Martha, which in a series of 34 vignettes follows the life of a black woman named Maud Martha Brown as she moves about life from childhood to adulthood. It tells the story of “a woman with doubts about herself and where and how she fits into the world. Maud’s concern is not so much that she is inferior but that she is perceived as being ugly,” states author Harry B. Shaw in his book Gwendolyn Brooks. Maud suffers prejudice and discrimination not only from white individuals but also from black individuals who have lighter skin tones than hers, something that is a direct reference to Brooks’ personal experience. Eventually, Maud stands up for herself by turning her back on a patronizing and racist store clerk. “The book is … about the triumph of the lowly,” Shaw comments. In contrast, literary scholar Mary Helen Washington emphasizes Brooks’s critique of racism and sexism, calling Maud Martha “a novel about bitterness, rage, self-hatred, and the silence that results from suppressed anger”.

In 1967, the year of Langston Hughes’s death, Brooks attended the Second Black Writers’ Conference at Nashville‘s Fisk University. Here, according to one version of events, she met activists and artists such as Imamu Amiri Baraka, Don L. Lee and others who exposed her to new black cultural nationalism. Recent studies argue that she had been involved in leftist politics in Chicago for many years and, under the pressures of McCarthyism, adopted a black nationalist posture as a means of distancing herself from her prior political connections. Brooks’s experience at the conference inspired many of her subsequent literary activities. She taught creative writing to some of Chicago’s Blackstone Rangers, otherwise a violent criminal gang. In 1968, she published one of her most famous works, In the Mecca, a long poem about a mother’s search for her lost child in a Chicago apartment building. The poem was nominated for the National Book Award for poetry.

Her autobiographical Report From Part One, including reminiscences, interviews, photographs and vignettes, came out in 1972, and Report From Part Two was published in 1995, when she was almost 80.

Brooks said her first teaching experience was at the University of Chicago when she was invited by author Frank London Brown to teach a course in American literature. It was the beginning of her lifelong commitment to sharing poetry and teaching writing. Brooks taught extensively around the country and held posts at Columbia College Chicago, Northeastern Illinois University, Chicago State University, Elmhurst College, Columbia University, and the City College of New York.

The Rare Book & Manuscript Library of the University of Illinois acquired Brooks’s archives from her daughter Nora Blakely. In addition, the Bancroft Library at UC Berkeley has a collection of her personal papers, especially from 1950 to 1989

A Celebration of Gwendolyn Brooks