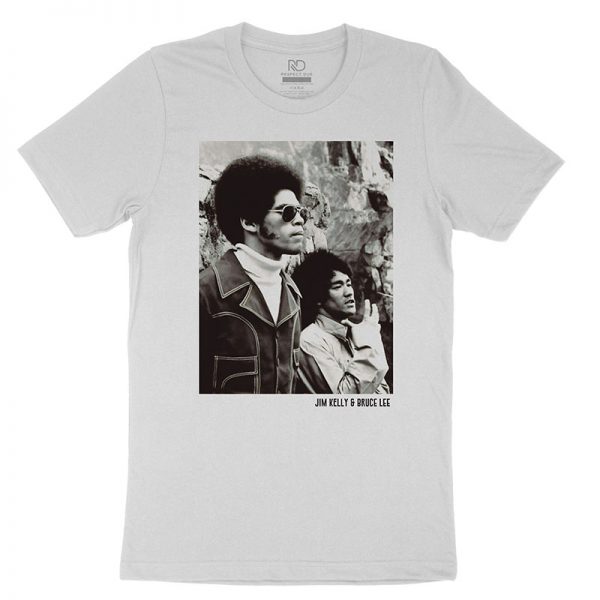 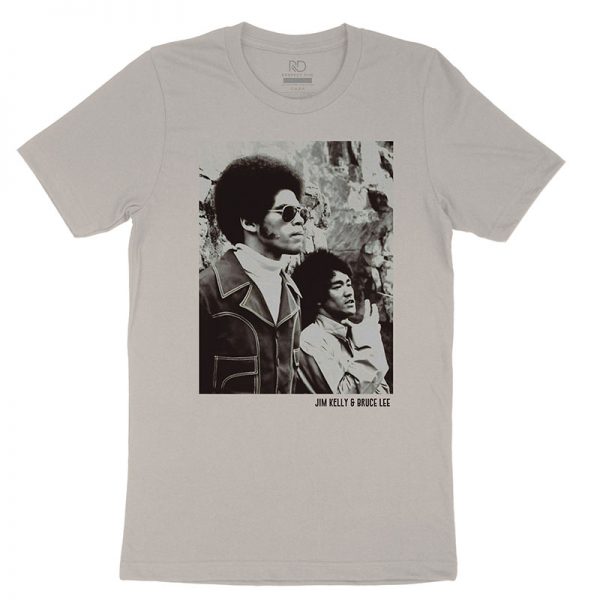 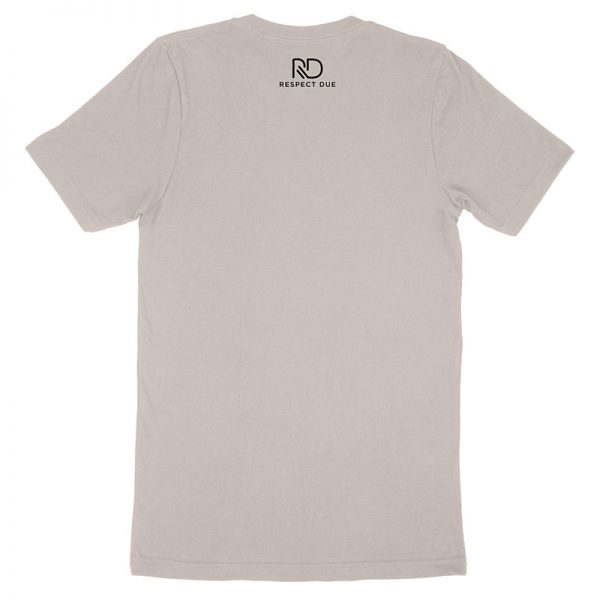 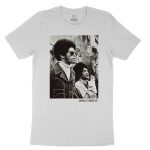 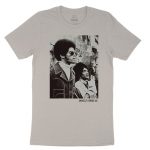 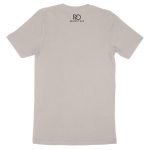 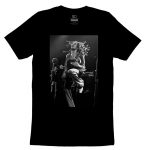 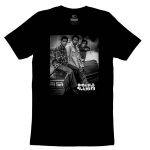 Digable Planets Unisex T-Shirt
0 out of 5
( There are no reviews yet. )

Welcome to the Respect Due family Jim Kelly and Bruce Lee! We salute you.

James Milton Kelly (May 5, 1946 – June 29, 2013) was an American athlete, actor, and martial artist. Kelly rose to fame in the early 1970s appearing in several blaxploitation films. Kelly is perhaps best known for his role as Williams in the 1973 martial arts action film Enter the Dragon. He also had lead roles in 1974’s Black Belt Jones as the title character and Three the Hard Way as Mister Keyes. Kelly died of cancer on June 29, 2013 at age 67.

Kelly was born in Millersburg, Kentucky. His father ran a locker-rental service for Navy personnel. He began his athletic career at Bourbon County High School in Paris, Kentucky, competing in basketball, football, and track and field. He attended the University of Louisville, where he played football, but left during his freshman year to begin studying Shorin-ryu karate.

Kelly began his martial arts career under the tutelage of Sin Kwan The (Shaolin-Do) in Lexington, Kentucky. He trained in Okinawan karate under the direction of Parker Shelton, Nate Patton, and Gordon Doversola. During the early 1970s, Jim Kelly became one of the most decorated world karate champions in the sport. In 1971, Kelly won four prestigious championships that same year, most notably, the World Middleweight Karate title at the 1971 Long Beach International Karate Championships. Kelly opened his own dojo, which was frequented by numerous Hollywood celebrities. He taught karate to actor Calvin Lockhart for a role in a thriller feature film Melinda (1972) and plays a martial arts instructor in the movie. Kelly was also a professional tennis player on the USTA Senior Men’s Circuit. He played amateur tennis in the 1970s at Plummer Park in West Hollywood.

As an actor, Kelly became the first black martial arts film star. He co-starred alongside Bruce Lee in the blockbuster, Enter the Dragon (1973) in a role originally intended for actor Rockne Tarkington, who unexpectedly dropped out days before shooting in Hong Kong. Producer Fred Weintraub had heard about Kelly’s karate studio in the Crenshaw district of Los Angeles, went there to see him, and was immediately impressed.

This appearance led to starring roles in a string of martial arts-themed blaxploitation films, among them Melinda (1972), and Black Belt Jones (1974). This was the only role in which he was the primary star; most of Kelly’s film roles played up the novelty of an African-American martial arts master. He earned a three-film contract with Warner Brothers and made Three the Hard Way (1974) with Jim Brown and Fred Williamson, and Hot Potato (1976), in which he rescues a diplomat’s daughter from the jungles of Thailand.[citation needed] After his contract ended with Warner Brothers, he starred in low-budget films Black Samurai (1977), Death Dimension (1978), and Tattoo Connection (1978). After his appearance in One Down, Two to Go (1982), Kelly rarely appeared in movies. A deleted scene from the film Undercover Brother (2002), included on the DVD extra features, shows him in a cameo appearance with Eddie Griffin. In his last film, Kelly made a cameo appearance as Cleavon Washington in Afro Ninja (2009), produced, directed by, and starring veteran stuntman Mark Hicks.

Enter the Dragon is a 1973 martial arts action film produced by and starring Bruce Lee. The film, which co-stars John Saxon and Jim Kelly, was directed by Robert Clouse. It would be Bruce Lee’s final completed film appearance before his death on 20 July 1973 at age 32. A joint American and Hong Kong production, it premiered in Los Angeles on 19 August 1973, one month after Lee’s death and went on to gross US$90 million worldwide, equivalent to US$508 million adjusted for inflation.

Enter the Dragon is considered to be one of the greatest martial arts films of all time. In 2004, it was selected for preservation in the United States National Film Registry by the Library of Congress as being “culturally, historically, or aesthetically significant”. Among the first films to combine martial arts action with the emerging Blaxploitation genre, its success led to a series of similar productions combining both genres. Its themes have also generated scholarly debate about how they reflect the changes taking place within post-colonial Asian societies following the end of World War II.

Lee, a highly proficient Shaolin martial artist and instructor from Hong Kong, is approached by Braithwaite, a British intelligence agent investigating the suspected crime lord Han. Lee is persuaded to attend a high-profile martial arts competition on Han’s private island in order to gather evidence that will prove Han’s involvement in drug trafficking and prostitution. Shortly before his departure, Lee also learns that his sister’s killer, O’Hara, is working as Han’s bodyguard on the island. Also fighting in the competition are Roper, an indebted gambling addict, and fellow Vietnam war veteran Williams.

At the end of the first day, Han gives strict orders to the competitors not to leave their rooms. Lee makes contact with undercover operative Mei Ling and sneaks into Han’s compound, looking for evidence. He is discovered by several guards but manages to escape. The next morning, Han orders his giant guard Bolo to kill the guards in public for failing their duties. After the execution, Lee faces O’Hara in the competition and ends up killing him. With the day’s competition over, Han confronts Williams, who had also left his room the previous night to exercise. Han believes Williams to be the intruder and beats him to death when he refuses to cooperate. Han then reveals his drug operation to Roper, hoping that he will join his organization. He also implicitly threatens to imprison Roper, along with all the other martial artists who joined Han’s tournaments in the past, if Roper refuses. Despite being initially intrigued, Roper refuses after learning of Williams’ fate.

Lee sneaks out again that night and manages to send a message to Braithwaite, but he is captured after a prolonged battle with the guards. The next morning, Han arranges for Roper to fight Lee, but Roper refuses. As a punishment, Roper has to fight Bolo instead, whom he manages to overpower and beat after a grueling encounter. Enraged by the unexpected failure, Han commands his remaining men to kill Lee and Roper. Facing insurmountable odds, they are soon aided by the island’s prisoners, who had been freed by Mei Ling. Han escapes and is pursued by Lee, who finally corners him in his museum. After a brutal fight, Han runs away into a hidden mirror room. The mirrors give Han an advantage, but Lee breaks all the room’s mirrors to reveal Han’s location, and eventually kills him. Lee returns outside to the main battle, which is now over. A bruised and bloodied Roper sits victorious while the military finally arrive to take control of the island.