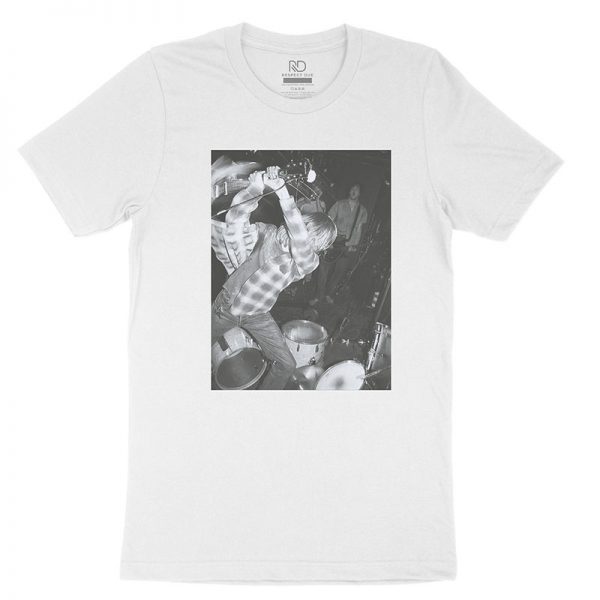 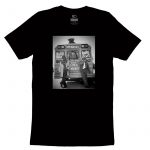 Muddy Waters Unisex T-Shirt
0 out of 5
( There are no reviews yet. )

Welcome to the Respect Due family Kurt Cobain! We salute you.

Nirvana – The Man Who Sold The World (MTV Unplugged)

Kurt Donald Cobain (February 20, 1967 – April 5, 1994) was an American singer, songwriter, and musician, best known as the guitarist and frontman of the rock band Nirvana. Regarded as a Generation X icon, he is considered to be one of the most iconic and influential rock musicians in the history of alternative music.

Born in Aberdeen, Washington, Cobain formed the band Nirvana with Krist Novoselic and Aaron Burckhard in 1987 and established it as part of the Seattle music scene which later became known as grunge. After signing with major label DGC Records, Nirvana found global success with “Smells Like Teen Spirit” from their critically acclaimed second album Nevermind (1991). Following the success of Nevermind, Nirvana was labelled “the flagship band” of Generation X, and Cobain was hailed as “the spokesman of a generation”; however, Cobain resented this, believing his message and artistic vision had been misinterpreted by the public, with his personal problems often subject to media attention.

During the last years of his life, Cobain struggled with heroin addiction and chronic health problems such as depression. He also struggled with the personal and professional pressures of fame, and his marriage to musician Courtney Love. On April 8, 1994, Cobain was found dead at his home in Seattle at the age of 27; police concluded he had died on April 5 from a self-inflicted shotgun wound to his head.

Cobain was posthumously inducted into the Rock and Roll Hall of Fame, along with Nirvana bandmates Dave Grohl and Novoselic, in their first year of eligibility in 2014. In 2003, David Fricke of Rolling Stone ranked him the 12th greatest guitarist of all time. He was ranked 7th by MTV in the “22 Greatest Voices in Music”. In 2006, he was placed 20th by Hit Parader on their list of the “100 Greatest Metal Singers of All Time”.

On his 14th birthday on February 20, 1981, Cobain’s uncle offered him either a bike or a used guitar—Kurt chose the guitar. Soon, he was trying to play Led Zeppelin‘s power ballad, “Stairway to Heaven“. He also learned how to play “Louie Louie,” Queen‘s “Another One Bites the Dust“, and the Cars‘ “My Best Friend’s Girl“, before he began working on his own songs. Cobain played left-handed, despite being forced to write right-handed.

In early 1985, Cobain formed Fecal Matter after he had dropped out of Aberdeen High School. One of “several joke bands” that arose from the circle of friends associated with the Melvins, it initially featured Cobain singing and playing guitar, Melvins drummer Dale Crover playing bass, and Greg Hokanson playing drums. They spent several months rehearsing original material and covers, including songs by The Ramones, Led Zeppelin, and Jimi Hendrix. Fecal Matter disbanded in 1986, while the Melvins supported their debut EP, Six Songs.

During high school, Cobain rarely found anyone with whom he could play music. While hanging out at the Melvins’ practice space, he met Krist Novoselic, a fellow devotee of punk rock. Novoselic’s mother owned a hair salon, and the pair occasionally practiced in the upstairs room of the salon. A few years later, Cobain tried to convince Novoselic to form a band with him by lending him a copy of a home demo recorded by Cobain’s earlier band, Fecal Matter.

After months of asking, Novoselic finally agreed to join Cobain, forming the beginnings of Nirvana. Religion appeared to remain a significant muse to Cobain during this time, as he often used Christian related imagery in his work, and developed a budding interest in Jainism and Buddhist philosophy. The band name “Nirvana” was taken from the Buddhist concept, which Cobain described as “freedom from pain, suffering and the external world,” a concept that he aligned with the punk rock ethos and ideology.

Cobain was disenchanted after early touring, due to the band’s inability to draw substantial crowds and the difficulty of sustaining themselves. During their first few years playing together, Novoselic and Cobain were hosts to a rotating list of drummers. Eventually, the band settled on Chad Channing, with whom Nirvana recorded the album Bleach, released on Sub Pop Records in 1989. Cobain, however, became dissatisfied with Channing’s style and subsequently fired him which made the band in need of a new drummer. They eventually hired Dave Grohl who helped the band record their 1991 major-label debut, Nevermind. With Nevermind‘s lead single, “Smells Like Teen Spirit,” Nirvana quickly entered the mainstream, popularizing a subgenre of alternative rock called “grunge“. Since their debut, Nirvana has sold over 25 million albums in the United States (U.S.) alone, and over 80 million worldwide. The success of Nevermind provided numerous Seattle bands, such as Alice in Chains, Pearl Jam, and Soundgarden, access to wider audiences. As a result, alternative rock became a dominant genre on radio and music television in the U.S. during the early to middle 1990s. Nirvana was considered the “flagship band of Generation X,” and Cobain found himself reluctantly anointed by the media as the generation’s “spokesman.”

Cobain struggled to reconcile the massive success of Nirvana with his underground roots and vision. He also felt persecuted by the media, comparing himself to Frances Farmer. He began to harbor resentment against people who claimed to be fans of the band, yet refused to acknowledge, or misinterpreted, the band’s social and political views. A vocal opponent of sexism, racism and homophobia, he was publicly proud that Nirvana had played at a gay rights benefit, supporting No-on-Nine, in Oregon in 1992. The show was held in opposition to Ballot Measure Nine, a ballot measure, that if passed, would have directed schools to teach that homosexuality was “abnormal, wrong, unnatural and perverse”. Cobain was a vocal supporter of the pro-choice movement and Nirvana was involved in L7‘s Rock for Choice campaign. He received death threats from a small number of anti-abortion activists for participating in the pro-choice campaign, with one activist threatening to shoot Cobain as soon as he stepped on a stage.

Collaboration with other artists

In 1989, members of Nirvana and fellow American alternative rock band Screaming Trees formed a side project known as the Jury. The band featured Cobain on vocals and guitar, Mark Lanegan on vocals, Krist Novoselic on bass and Mark Pickerel on drums. Over two days of recording sessions, on August 20 and 28, 1989, the band recorded four songs also performed by Lead Belly; “Where Did You Sleep Last Night?“, an instrumental version of “Grey Goose“, “Ain’t It a Shame” and “They Hung Him on a Cross“; the latter of which featured Cobain performing solo. Cobain was inspired to record the songs after receiving a copy of Lead Belly’s Last Sessions from friend Slim Moon; after hearing it he “felt a connection to Leadbelly’s almost physical expressions of longing and desire.”

In 1992, Cobain contacted William S. Burroughs about a possible collaboration. Burroughs responded by sending him a recording of “The Junky’s Christmas“ (which he recorded in his studio in Lawrence, Kansas). Two months later at a studio in Seattle, Cobain added guitar backing based on “Silent Night” and “To Anacreon in Heaven”. The two would meet shortly later in Lawrence, Kansas and produce “The “Priest” They Called Him“, a spoken word version of “The Junky’s Christmas”.

The Last 48 Hours of Kurt Cobain