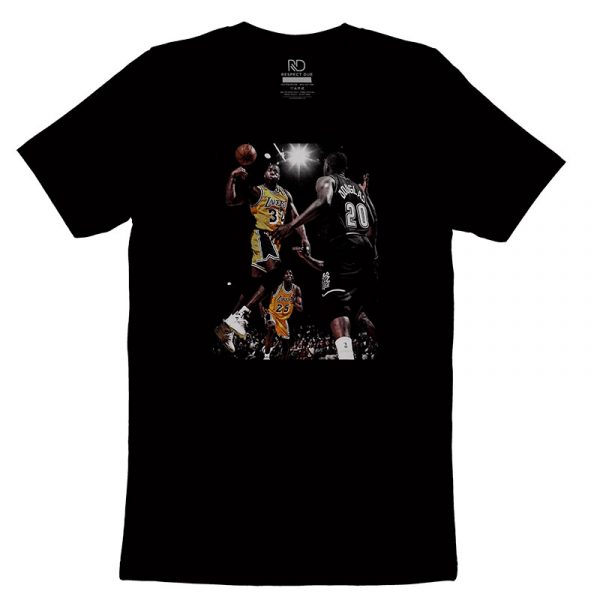 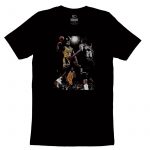 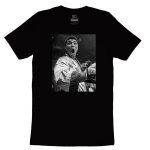 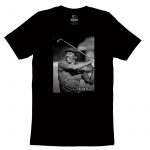 Calvin Peete Unisex T-Shirt
0 out of 5
( There are no reviews yet. )

Welcome to the Respect Due family Magic Johnson! We salute you.

Earvin “Magic” Johnson Jr. (born August 14, 1959) is an American retired professional basketball player and former president of basketball operations of the Los Angeles Lakers of the National Basketball Association (NBA). He played point guard for the Lakers for 13 seasons. After winning championships in high school and college, Johnson was selected first overall in the 1979 NBA draft by the Lakers. He won a championship and an NBA Finals Most Valuable Player Award in his rookie season, and won four more championships with the Lakers during the 1980s. Johnson retired abruptly in 1991 after announcing that he had contracted HIV, but returned to play in the 1992 All-Star Game, winning the All-Star MVP Award. After protests from his fellow players, he retired again for four years, but returned in 1996, at age 36, to play 32 games for the Lakers before retiring for the third and final time.

Johnson’s career achievements include three NBA MVP Awards, nine NBA Finals appearances, twelve All-Star games, and ten All-NBA First and Second Team nominations. He led the league in regular-season assists four times, and is the NBA’s all-time leader in average assists per game, at 11.2. Johnson was a member of the 1992 United States men’s Olympic basketball team (“The Dream Team”), which won the Olympic gold medal in 1992. After leaving the NBA in 1992, Johnson formed the Magic Johnson All-Stars, a barnstorming team that traveled around the world playing exhibition games. Johnson was honored as one of the 50 Greatest Players in NBA History in 1996.

Johnson became a two-time inductee into the Basketball Hall of Fame—being enshrined in 2002 for his individual career, and again in 2010 as a member of the “Dream Team”. He was rated the greatest NBA point guard of all time by ESPN in 2007. His friendship and rivalry with Boston Celtics star Larry Bird, whom he faced in the 1979 NCAA finals and three NBA championship series, are well documented.

Since his retirement, Johnson has been an advocate for HIV/AIDS prevention and safe sex, as well as an entrepreneur, philanthropist, broadcaster and motivational speaker. His public announcement of his HIV-positive status in 1991 helped dispel the stereotype, still widely held at the time, that HIV was a “gay disease” that heterosexuals need not worry about; his bravery in making this announcement was widely commended. Named by Ebony magazine as one of America’s most influential black businessmen in 2009, Johnson has numerous business interests, and was a part-owner of the Lakers for several years. Johnson also is part of a group of investors that purchased the Los Angeles Dodgers in 2012 and the Los Angeles Sparks in 2014.

Johnson introduced a fast-paced style of basketball called “Showtime“, described as a mix of “no-look passes off the fastbreak, pin-point alley-oops from halfcourt, spinning feeds and overhand bullets under the basket through triple teams.” Fellow Lakers guard Michael Cooper said, “There have been times when [Johnson] has thrown passes and I wasn’t sure where he was going. Then one of our guys catches the ball and scores, and I run back up the floor convinced that he must’ve thrown it through somebody.” Johnson could dominate a game without scoring, running the offense and distributing the ball with flair. In the 1982 NBA Finals, he was named the Finals MVP averaging just 16.2 points, the lowest average of any Finals MVP award recipient in the three-point shot era.

Johnson was exceptional because he played point guard despite being 6 ft 9 in (2.06 m), a size reserved normally for frontcourt players. He combined the size of a power forward, the one-on-one skills of a swingman, and the ball handling talent of a guard, making him one of the most dangerous triple-double threats of all time; his 138 triple-double games are second only to Oscar Robertson‘s 181. Johnson is the only player in NBA Finals history to have triple-doubles in multiple series-clinching games.

For his feats, Johnson was voted as one of the 50 Greatest Players of All Time by the NBA in 1996, and was inducted into the Naismith Memorial Basketball Hall of Fame in 2002. ESPN’s SportsCentury ranked Johnson #17 in their “50 Greatest Athletes of the 20th Century” In 2006, ESPN.com rated Johnson the greatest point guard of all time, stating, “It could be argued that he’s the one player in NBA history who was better than Michael Jordan.” Several of his achievements in individual games have also been named among the top moments in the NBA. At the 2019 NBA Awards, Johnson received the NBA Lifetime Achievement Award (shared with Larry Bird).

Johnson and Bird were first linked as rivals after Johnson’s Michigan State squad defeated Bird’s Indiana State team in the 1979 NCAA finals. The rivalry continued in the NBA, and reached its climax when Boston and Los Angeles met in three out of four NBA Finals from 1984 to 1987. Johnson asserted that for him, the 82-game regular season was composed of 80 normal games, and two Lakers–Celtics games. Similarly, Bird admitted that Johnson’s daily box score was the first thing he checked in the morning.

Several journalists hypothesized that the Johnson–Bird rivalry was so appealing because it represented many other contrasts, such as the clash between the Lakers and Celtics, between Hollywood flashiness (“Showtime”) and Boston/Indiana blue collar grit (“Celtic Pride”), and between blacks and whites. The rivalry was also significant because it drew national attention to the faltering NBA. Prior to Johnson and Bird’s arrival, the NBA had gone through a decade of declining interest and low TV ratings. With the two future Hall of Famers, the league won a whole generation of new fans, drawing both traditionalist adherents of Bird’s dirt court Indiana game and those appreciative of Johnson’s public park flair. According to sports journalist Larry Schwartz of ESPN, Johnson and Bird saved the NBA from bankruptcy.

Despite their on-court rivalry, Johnson and Bird became close friends during the filming of a 1984 Converse shoe advertisement that depicted them as enemies. Johnson appeared at Bird’s retirement ceremony in 1992, and described Bird as a “friend forever”; during Johnson’s Hall of Fame ceremony, Bird formally inducted his old rival.

In 2009, Johnson and Bird collaborated with journalist Jackie MacMullan on a non-fiction book titled When the Game Was Ours. The book detailed their on-court rivalry and friendship with one another. The following year, HBO developed a documentary about their rivalry titled Magic & Bird: A Courtship of Rivals, which was directed by Ezra Edelman.

Magic Johnson: The Art of Passing