Welcome to the Respect Due family Marvin Gaye! We salute you.


Marvin Gaye (born Marvin Pentz Gay Jr.; April 2, 1939 – April 1, 1984) was an American singer, songwriter, and record producer. He helped to shape the sound of Motown in the 1960s, first as an in-house session player and later as a solo artist with a string of hits, earning him the nicknames “Prince of Motown” and “Prince of Soul”.

Gaye’s Motown hits include “Ain’t That Peculiar“, “How Sweet It Is (To Be Loved By You)“, and “I Heard It Through the Grapevine“, and duet recordings with Mary Wells, Kim Weston, Diana Ross, and Tammi Terrell. During the 1970s, he recorded the albums What’s Going On and Let’s Get It On and became one of the first artists in Motown, along with Stevie Wonder, to break away from the reins of a production company. His later recordings influenced several contemporary R&B subgenres, such as quiet storm and neo soul. Following a period in Europe as a tax exile in the early 1980s, he released the 1982 hit “Sexual Healing“, which won him his first two Grammy Awards, and its parent album Midnight Love. Gaye’s last television appearances were at the 1983 NBA All-Star Game, where he sang “The Star-Spangled Banner“, Motown 25: Yesterday, Today, Forever and on Soul Train which was his third and final appearance.

On April 1, 1984, the day before his 45th birthday, Gaye’s father, Marvin Gay Sr., fatally shot him at their house in the West Adams district of Los Angeles. Many institutions have posthumously bestowed Gaye with awards and other honors including the Grammy Lifetime Achievement Award, and inductions into the Rhythm and Blues Music Hall of Fame, the Songwriters Hall of Fame, and the Rock and Roll Hall of Fame.

Following his return, Gaye and his good friend Reese Palmer formed the vocal quartet The Marquees. The group performed in the D.C. area and soon began working with Bo Diddley, who assigned the group to Columbia subsidiary OKeh Records after failing to get the group signed to his own label, Chess. The group’s sole single, “Wyatt Earp” (co-written by Bo Diddley), failed to chart and the group was soon dropped from the label. Gaye began composing music during this period.

Moonglows co-founder Harvey Fuqua later hired The Marquees as employees. Under Fuqua’s direction, the group changed its name to Harvey and the New Moonglows, and relocated to Chicago. The group recorded several sides for Chess in 1959, including the song “Mama Loocie”, which was Gaye’s first lead vocal recording. The group found work as session singers for established acts such as Chuck Berry, singing on the hits “Back in the U.S.A.” and “Almost Grown“.

In 1960, the group disbanded. Gaye relocated to Detroit with Fuqua where he signed with Tri-Phi Records as a session musician, playing drums on several Tri-Phi releases. Gaye performed at Motown president Berry Gordy‘s house during the holiday season in 1960. Impressed by the singer, Gordy sought Fuqua on his contract with Gaye. Fuqua agreed to sell part of his interest in his contract with Gaye. Shortly afterwards, Gaye signed with Motown subsidiary Tamla.

When Gaye signed with Tamla, he pursued a career as a performer of jazz music and standards, having no desire to become an R&B performer. Before the release of his first single, Gaye was teased about his surname, with some jokingly asking, “Is Marvin Gay?” Gaye changed the spelling of his surname by adding an e, in the same way as did Sam Cooke. Author David Ritz wrote that Gaye did this to silence rumors of his sexuality, and to put more distance between himself and his father.

Gaye released his first single, “Let Your Conscience Be Your Guide“, in May 1961, with the album The Soulful Moods of Marvin Gaye, following a month later. Gaye’s initial recordings failed commercially and he spent most of 1961 performing session work as a drummer for artists such as The Miracles, The Marvelettes and blues artist Jimmy Reed for $5 (US$43 in 2019 dollars) a week. While Gaye took some advice on performing with his eyes open (having been accused of appearing as though he were sleeping), he refused to attend grooming school courses at the John Roberts Powers School for Social Grace in Detroit because of his unwillingness to comply with its orders, something he later regretted.

The three singles and songs from the 1962 sessions were included on Gaye’s second album, That Stubborn Kinda Fellow. Starting in October of the year, Gaye performed as part of the Motortown Revue, a series of concert tours headlined at the north and south eastern coasts of the United States as part of the Chitlin’ Circuit. A filmed performance of Gaye at the Apollo Theater took place in June 1963. Later that October, Tamla issued the live album, Marvin Gaye Recorded Live on Stage. “Can I Get a Witness” became one of Gaye’s early international hits. 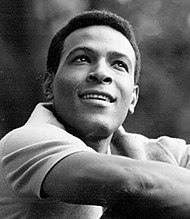 In 1964, Gaye recorded a successful duet album with singer Mary Wells titled Together, which reached No. 42 on the pop album chart. The album’s two-sided single, including “Once Upon a Time” and ‘What’s the Matter With You Baby“, each reached the top 20. Gaye’s next solo hit, “How Sweet It Is (To Be Loved By You)“, which Holland-Dozier-Holland wrote for him, reached No. 6 on the Hot 100 and reached the top 50 in the UK. Gaye started getting television exposure around this time, on shows such as American Bandstand. Also in 1964, he appeared in the concert film, The T.A.M.I. Show. Gaye had two number-one R&B singles in 1965 with the Miracles–composed “I’ll Be Doggone” and “Ain’t That Peculiar“. Both songs became million-sellers. After this, Gaye returned to jazz-derived ballads for a tribute album to the recently-deceased Nat “King” Cole.

After scoring a hit duet, “It Takes Two” with Kim Weston, Gaye began working with Tammi Terrell on a series of duets, mostly composed by Ashford & Simpson, including “Ain’t No Mountain High Enough“, “Your Precious Love“, “Ain’t Nothing Like the Real Thing” and “You’re All I Need to Get By“.

In October 1967, Terrell collapsed in Gaye’s arms during a performance in Farmville, Virginia. Terrell was subsequently rushed to Farmville’s Southside Community Hospital, where doctors discovered she had a malignant tumor in her brain. The diagnosis ended Terrell’s career as a live performer, though she continued to record music under careful supervision. Despite the presence of hit singles such as “Ain’t Nothing Like the Real Thing” and “You’re All I Need to Get By”, Terrell’s illness caused problems with recording, and led to multiple operations to remove the tumor. Gaye was reportedly devastated by Terrell’s sickness and became disillusioned with the record business.

On October 6, 1968, Gaye sang the national anthem during Game 4 of the 1968 World Series, held at Tiger Stadium, in Detroit, Michigan, between the Detroit Tigers and the St. Louis Cardinals.

In late 1968, Gaye’s recording of I Heard It Through the Grapevine became Gaye’s first to reach No. 1 on the Billboard Hot 100. It also reached the top of the charts in other countries, selling over four million copies. However, Gaye felt the success was something he “didn’t deserve” and that he “felt like a puppet – Berry’s puppet, Anna‘s puppet….” Gaye followed it up with “Too Busy Thinking About My Baby” and “That’s the Way Love Is“, which reached the top ten on the Billboard Hot 100 in 1969. That year, his album M.P.G. became his first No. 1 R&B album. Gaye produced and co-wrote two hits for The Originals during this period, including “Baby I’m For Real” and “The Bells“.

Tammi Terrell died from brain cancer on March 16, 1970; Gaye attended her funeral and after a period of depression, Gaye sought out a position on a professional football team, the Detroit Lions, where he later befriended Mel Farr and Lem Barney. It was eventually decided that Gaye would not be allowed to try out owing to fears of possible injuries that could have affected his music career.

Marvin Gaye – Got To Give It Up

Marvin Gaye – Lets Get It On