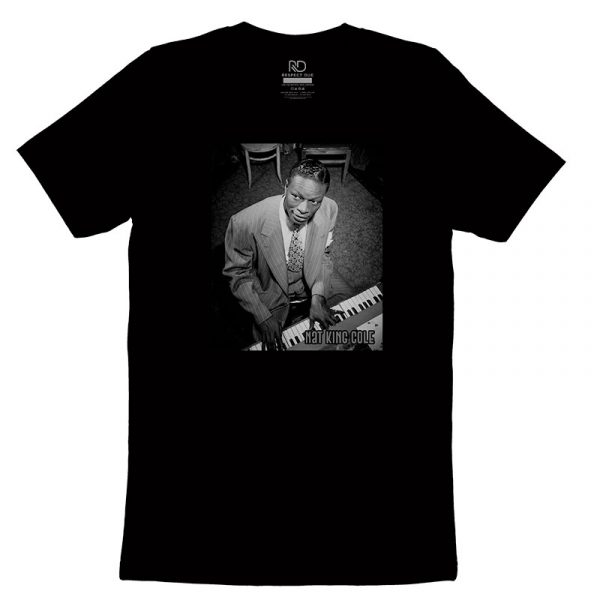 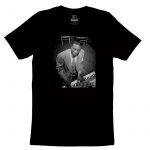 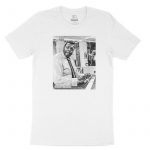 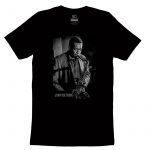 John Coltrane Unisex T-Shirt
0 out of 5
( There are no reviews yet. )

Welcome to the Respect Due family Nat King Cole! We salute you.

Nathaniel Adams Coles (March 17, 1919 – February 15, 1965), known professionally as Nat King Cole, was an American singer and jazz pianist. He recorded over 100 songs that became hits on the pop charts. His trio was the model for small jazz ensembles that followed. Cole also acted in films and on television and performed on Broadway. He was the first African-American man to host an American television series. He was the father of singer-songwriter Natalie Cole (1950–2015).

Cole learned to play the organ from his mother, Perlina Coles, the church organist. His first performance was “Yes! We Have No Bananas” at the age of four. He began formal lessons at 12, learning jazz, gospel, and classical music on piano “from Johann Sebastian Bach to Sergei Rachmaninoff.” As a youth, he joined the news delivery boys’ “Bud Billiken Club” band for The Chicago Defender.

The Cole family moved to the Bronzeville neighborhood of Chicago, where he attended Wendell Phillips Academy High School, the school Sam Cooke attended a few years later. He participated in Walter Dyett‘s music program at DuSable High School. He would sneak out of the house to visit clubs, sitting outside to hear Louis Armstrong, Earl Hines, and Jimmie Noone.

When he was 15, Cole dropped out of high school to pursue a music career. After his brother Eddie, a bassist, came home from touring with Noble Sissle, they formed a sextet and recorded two singles for Decca in 1936 as Eddie Cole’s Swingsters. They performed in a revival of the musical Shuffle Along. Nat Cole went on tour with the musical. In 1937, he married Nadine Robinson, who was a member of the cast. After the show ended in Los Angeles, Cole and Nadine settled there while he looked for work. He led a big band, then found work playing piano in nightclubs. When a club owner asked him to form a band, he hired bassist Wesley Prince and guitarist Oscar Moore. They called themselves the King Cole Swingsters after the nursery rhyme in which “Old King Cole was a merry old soul.” They changed their name to the King Cole Trio before making radio transcriptions and recording for small labels.

Cole recorded “Sweet Lorraine” in 1940, and it became his first hit. According to legend, his career as a vocalist started when a drunken bar patron demanded that he sing the song. Cole said that this fabricated story sounded good, so he didn’t argue with it. In fact, there was a customer one night who demanded that he sing, but because it was a song Cole didn’t know, he sang “Sweet Lorraine” instead. As people heard Cole’s vocal talent, they requested more vocal songs, and he obliged.

In 1941, the trio recorded “That Ain’t Right” for Decca, followed the next year by “All for You” for Excelsior. They also recorded “I’m Lost“, a song written by Otis René, the owner of Excelsior.

I started out to become a jazz pianist; in the meantime I started singing and I sang the way I felt and that’s just the way it came out.
— Nat King Cole, Voice of America interview, c.1956.

Cole appeared in the first Jazz at the Philharmonic concerts in 1944. He was credited on Mercury as “Shorty Nadine”, a derivative of his wife’s name, because he had an exclusive contract with Capitol since signing with the label the year before. He recorded with Illinois Jacquet and Lester Young. 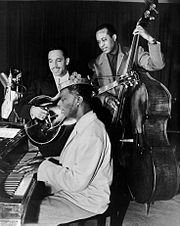 King Cole Trio Time on NBC with Cole on piano, Oscar Moore on guitar, and Johnny Miller on double bass, 1947

In 1946, the trio broadcast King Cole Trio Time, a 15-minute radio program. This was the first radio program to be sponsored by a black musician. Between 1946 and 1948, the trio recorded radio transcriptions for Capitol Records Transcription Service. They also performed on the radio programs Swing Soiree, Old Gold, The Chesterfield Supper Club, Kraft Music Hall, and The Orson Welles Almanac.

On June 7, 1953, Cole performed for the famed ninth Cavalcade of Jazz concert held at Wrigley Field in Chicago which was produced by Leon Hefflin, Sr. Also featured that day were Roy Brown and his Orchestra, Shorty Rogers, Earl Bostic, Don Tosti and His Mexican Jazzmen, and Louis Armstrong and his All Stars with Velma Middleton.

On November 5, 1956, The Nat ‘King’ Cole Show debuted on NBC. The variety program was one of the first hosted by an African American. The program started at a length of fifteen-minutes but was increased to a half-hour in July 1957. Rheingold Beer was a regional sponsor, but a national sponsor was never found. The show was in trouble financially despite efforts by NBC, Harry Belafonte, Tony Bennett, Ella Fitzgerald, Eartha Kitt, Frankie Laine, Peggy Lee, and Mel Tormé. Cole decided to end the program. The last episode aired on December 17, 1957. Commenting on the lack of sponsorship, Cole said shortly after its demise, “Madison Avenue is afraid of the dark.”

Throughout the 1950s, Cole continued to record hits that sold millions throughout the world, such as “Smile“, “Pretend“, “A Blossom Fell“, and “If I May”. His pop hits were collaborations with Nelson Riddle, Gordon Jenkins, and Ralph Carmichael. Riddle arranged several of Cole’s 1950s albums, including Nat King Cole Sings for Two in Love (1953), his first 10-inch LP. In 1955, “Darling, Je Vous Aime Beaucoup” reached number 7 on the Billboard chart. Love Is the Thing went to number one in April 1957 remained his only number one album.

In 1959, he received a Grammy Award for Best Performance By a “Top 40” Artist for “Midnight Flyer”. 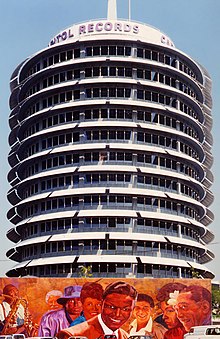 Capitol Records Building, known as “The House That Nat Built” on Vine St.

In 1958, Cole went to Havana, Cuba, to record Cole Español, an album sung entirely in Spanish. It was so popular in Latin America and the U.S. that it was followed by two more Spanish-language albums: A Mis Amigos (1959) and More Cole Español (1962).

After the change in musical tastes, Cole’s ballads appealed little to young listeners, despite a successful attempt at rock and roll with “Send for Me“, which peaked at number 6 on the pop chart. Like Dean Martin, Frank Sinatra, and Tony Bennett, he found that the pop chart had been taken over by youth-oriented acts.

In 1960, Cole’s longtime collaborator Nelson Riddle left Capitol to join Reprise Records, which was established by Frank Sinatra. Riddle and Cole recorded one final hit album, Wild Is Love, with lyrics by Ray Rasch and Dotty Wayne. Cole later retooled the concept album into an Off-Broadway show, I’m with You.

Nevertheless, Cole recorded some hit singles during the 1960s, including “Let There Be Love” with George Shearing in 1961, the country-flavored hit “Ramblin’ Rose” in August 1962, “Dear Lonely Hearts“, “That Sunday, That Summer” and “Those Lazy-Hazy-Crazy Days of Summer“ (his final top-ten hit, reaching number 6 on the Pop chart). He performed in many short films, sitcoms, and television shows and played W. C. Handy in the film St. Louis Blues (1958). He also appeared in The Nat King Cole Story, China Gate, and The Blue Gardenia (1953).

In January 1964, Cole made one of his final television appearances, on The Jack Benny Program. He was introduced as “the best friend a song ever had” and sang “When I Fall in Love“. Cat Ballou (1965), his final film, was released several months after his death.

Earlier on, Cole’s shift to traditional pop led some jazz critics and fans to accuse him of selling out, but he never abandoned his jazz roots; as late as 1956 he recorded an all-jazz album, After Midnight, and many of his albums after this are fundamentally jazz-based, being scored for big band without strings, although the arrangements focus primarily on the vocal rather than instrumental leads.

Cole had one of his last major hits in 1963, two years before his death, with “Those Lazy-Hazy-Crazy Days of Summer“, which reached number 6 on the Pop chart. “Unforgettable” was made famous again in 1991 by Cole’s daughter Natalie when modern recording technology was used to reunite father and daughter in a duet. The duet version rose to the top of the pop charts, almost forty years after its original popularity.

Nat King Cole sings “When I Fall in Love”