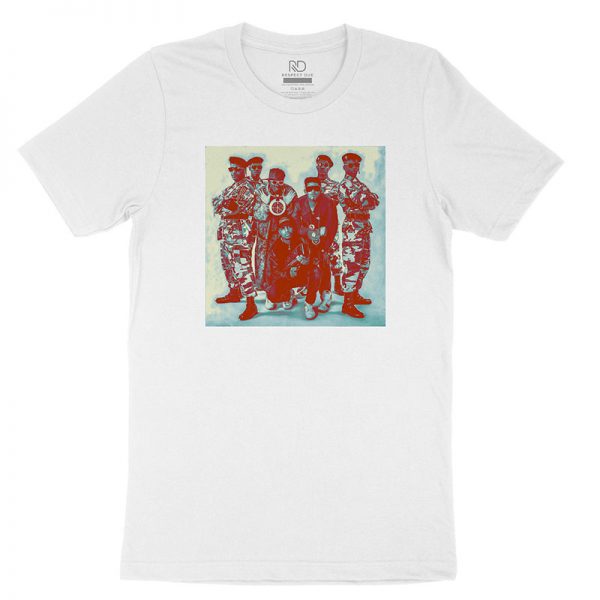 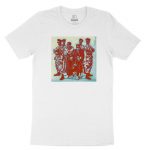 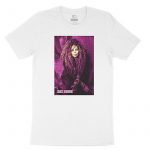 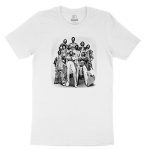 Welcome to the Respect Due family Public Enemy! We salute you.

Public Enemy is an American hip hop group consisting of Chuck D, Flavor Flav, Professor Griff, and DJ Lord (replaced Terminator X in 1998 after his retirement from the group). Formed in Long Island, New York, in 1985, they are known for their politically charged music and criticism of the American media, with an active interest in the frustrations and concerns of the African American community.

Their first four albums during the late 1980s and early 1990s were all certified either gold or platinum and were, according to music critic Robert Hilburn in 1998, “the most acclaimed body of work ever by a hip hop act”. Critic Stephen Thomas Erlewine called them “the most influential and radical band of their time.” They were inducted into Rock and Roll Hall of Fame in 2013.

Carlton Ridenhour (Chuck D) and William Drayton (Flavor Flav) met at Long Island’s Adelphi University in the mid-1980s. Developing his talents as an MC with Flav while delivering furniture for his father’s business, Chuck D and Spectrum City, as the group was called, released the record “Check Out the Radio”, backed by “Lies”, a social commentary—both of which would influence RUSH Productions’ Run–D.M.C. and Beastie Boys. Chuck D put out a tape to promote WBAU (the radio station where he was working at the time) and to fend off a local MC who wanted to battle him. He called the tape Public Enemy #1 because he felt like he was being persecuted by people in the local scene. This was the first reference to the notion of a public enemy in any of Chuck D’s songs. The single was created by Chuck D with a contribution by Flavor Flav, though this was before the group Public Enemy was officially assembled. Around 1986, Bill Stephney, the former Program Director at WBAU, was approached by Ali Hafezi and offered a position with the label. Stephney accepted, and his first assignment was to help fledgling producer Rick Rubin sign Chuck D, whose song “Public Enemy Number One” Rubin had heard from Andre “Doctor Dré” Brown.
Flavor Flav performing in 1991.

According to the book The History of Rap Music by Cookie Lommel, “Stephney thought it was time to mesh the hard-hitting style of Run DMC with politics that addressed black youth. Chuck recruited Spectrum City, which included Hank Shocklee, his brother Keith Shocklee, and Eric “Vietnam” Sadler, collectively known as the Bomb Squad, to be his production team and added another Spectrum City partner, Professor Griff, to become the group’s Minister of Information. With the addition of Flavor Flav and another local mobile DJ named Terminator X, the group Public Enemy was born.” According to Chuck, The S1W, which stands for Security of the First World, “represents that the black man can be just as intelligent as he is strong. It stands for the fact that we’re not third-world people, we’re first-world people; we’re the original people.” Hank Shocklee came up with the name Public Enemy based on “underdog love and their developing politics” and the idea from Def Jam staffer Bill Stephney following the Howard Beach racial incident, Bernhard Goetz, and the death of Michael Stewart: “The Black man is definitely the public enemy.”

Public Enemy started out as opening act for the Beastie Boys during the latter’s Licensed to Ill popularity, and in 1987 released their debut album Yo! Bum Rush the Show.

Their debut album, Yo! Bum Rush the Show, was released in 1987 to critical acclaim. The album was the group’s first step toward stardom. In October 1987, music critic Simon Reynolds dubbed Public Enemy “a superlative rock band”. They released their second album It Takes a Nation of Millions to Hold Us Back in 1988, which performed better in the charts than their previous release, and included the hit single “Don’t Believe the Hype” in addition to “Bring the Noise”. Nation of Millions … was the first hip hop album to be voted album of the year in The Village Voice’s influential Pazz & Jop critics’ poll.

In 1989, the group returned to the studio to record Fear of a Black Planet, which continued their politically charged themes. The album was supposed to be released in late 1989, but was pushed back to April 1990. It was the most successful of any of their albums and, in 2005, was selected for preservation in the Library of Congress. It included the singles “Welcome To The Terrordome”, “911 Is a Joke”, which criticized emergency response units for taking longer to arrive at emergencies in the black community than those in the white community, and “Fight the Power”. “Fight the Power” is regarded as one of the most popular and influential songs in hip hop history. It was the theme song of Spike Lee’s Do the Right Thing.

The group’s next release, Apocalypse 91… The Enemy Strikes Black, continued this trend, with songs like “Can’t Truss It”, which addressed the history of slavery and how the black community can fight back against oppression; “I Don’t Wanna be Called Yo Nigga”, a track that takes issue with the use of the word nigga outside of its original derogatory context. The album also included the controversial song and video “By the Time I Get to Arizona”, which chronicled the black community’s frustration that some US states did not recognize Martin Luther King Jr.’s birthday as a national holiday. The video featured members of Public Enemy taking out their frustrations on politicians in the states not recognizing the holiday. In 1992, the group was one of the first rap acts to perform at the Reading Festival, in England, headlining the second day of the three-day festival.

After a 1994 motorcycle accident shattered his left leg and kept him in the hospital for a full month, Terminator X relocated to his 15-acre farm in Vance County, North Carolina. By 1998, he was ready to retire from the group and focus full-time on raising African black ostriches on his farm. In late 1998, the group started looking for Terminator X’s permanent replacement. Following several months of searching for a DJ, Professor Griff saw DJ Lord at a Vestax Battle and approached him about becoming the DJ for Public Enemy. DJ Lord joined as the group’s full-time DJ just in time for Public Enemy’s 40th World Tour. Since 1999, he has been the official DJ for Public Enemy on albums and world tours while winning numerous turntablist competitions, including multiple DMC finals.

In 2007, the group released an album entitled How You Sell Soul to a Soulless People Who Sold Their Soul?. Public Enemy’s single from the album was “Harder Than You Think”. Four years after How You Sell Soul … , in January 2011, Public Enemy released the album Beats and Places, a compilation of remixes and “lost” tracks. On July 13, 2012, Most of My Heroes Still Don’t Appear on No Stamp was released and was exclusively available on iTunes. In July 2012, on UK television an advert for the London 2012 Summer Paralympics featured a short remix of the song “Harder Than You Think”. The advert caused the song to reach No. 4 in the UK Singles Chart on September 2, 2012. On July 30, 2012, Public Enemy performed a free concert with Salt-N-Pepa and Kid ‘n Play at Wingate Park in Brooklyn, New York as part of the Martin Luther King Jr. Concert Series. On August 26, 2012, Public Enemy performed at South West Four music festival in Clapham Common in London. On October 1, 2012 The Evil Empire of Everything was released. On June 29, 2013, they performed at Glastonbury Festival 2013. On September 14, 2013 they performed at Riot Fest & Carnival 2013 in Chicago, Illinois. On September 20, 2013 they performed at Riot Fest & Side Show in Byers, Colorado.

In 2014 Chuck D launched PE 2.0 with Oakland rapper Jahi as a spiritual successor and “next generation” of Public Enemy. Jahi met Chuck D backstage during a soundcheck at the 1999 Rock & Roll Hall of Fame and later appeared as a support act on Public Enemy’s 20th Anniversary Tour in 2007. PE 2.0’s task is twofold, Jahi says, to “take select songs from the PE catalog and cover or revisit them” as well as new material with members of the original Public Enemy including DJ Lord, Davy DMX, Professor Griff and Chuck D. PE 2.0’s first album People Get Ready was released on October 7, 2014. InsPirEd PE 2.0’s second album and part two of a proposed trilogy was released a year later on October 11, 2015. Man Plans God Laughs, Public Enemy’s thirteenth album, was released in July 2015. On June 29, 2017, Public Enemy released their fourteenth album, Nothing Is Quick in the Desert. The album was available for free download through Bandcamp until July 4, 2017.