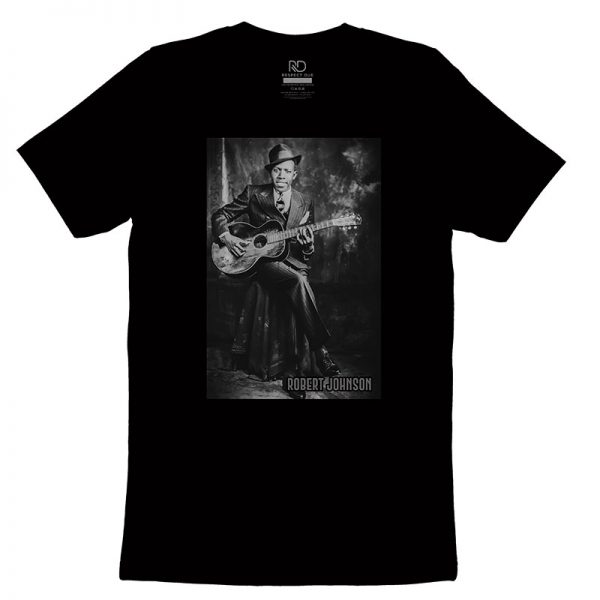 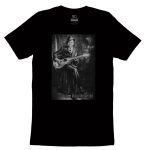 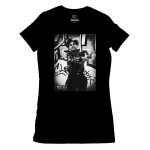 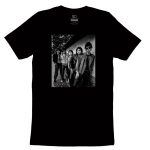 Welcome to the Respect Due family Robert Johnson! We salute you.

Robert Leroy Johnson (May 8, 1911 – August 16, 1938) was an American blues guitarist, singer, and songwriter. His landmark recordings in 1936 and 1937 display a combination of singing, guitar skills, and songwriting talent that has influenced later generations of musicians. He is now recognized as a master of the blues, particularly the Delta blues style.

As a traveling performer who played mostly on street corners, in juke joints, and at Saturday night dances, Johnson had little commercial success or public recognition in his lifetime. He participated in only two recording sessions, one in San Antonio in 1936, and one in Dallas in 1937, that produced 29 distinct songs (with 13 surviving alternate takes) recorded by famed Country Music Hall of Fame producer Don Law. These songs, recorded at low fidelity in improvised studios, were the totality of his recorded output. Most were released as 10-inch, 78 rpm singles from 1937–1938, with a few released after his death. Other than these recordings, very little was known of him during his life outside of the small musical circuit in the Mississippi Delta where he spent most of his life; much of his story has been reconstructed after his death by researchers. Johnson’s poorly documented life and death have given rise to much legend. The one most closely associated with his life is that he sold his soul to the devil at a local crossroads to achieve musical success.

His music had a small, but influential, following during his life and in the two decades after his death. In late 1938 John Hammond sought him out for a concert at Carnegie Hall, From Spirituals to Swing, only to discover that Johnson had died. Brunswick Records, which owned the original recordings, was bought by Columbia Records, where Hammond was employed. Musicologist Alan Lomax went to Mississippi in 1941 to record Johnson, also not knowing of his death. Law, who by then worked for Columbia Records, assembled a collection of Johnson’s recordings titled King of the Delta Blues Singers that was released by Columbia in 1961. It is widely credited with finally bringing Johnson’s work to a wider audience. The album would become influential, especially on the nascent British blues movement; Eric Clapton has called Johnson “the most important blues singer that ever lived.” Musicians such as Bob Dylan, Keith Richards, and Robert Plant have cited both Johnson’s lyrics and musicianship as key influences on their own work. Many of Johnson’s songs have been covered over the years, becoming hits for other artists, and his guitar licks and lyrics have been borrowed by many later musicians.

Renewed interest in Johnson’s work and life led to a burst of scholarship starting in the 1960s. Much of what is known about him was reconstructed by researchers such as Gayle Dean Wardlow and Bruce Conforth, especially in their 2019 award-winning biography of Johnson: Up Jumped the Devil: The Real Life of Robert Johnson (Chicago Review Press). Two films, the 1991 documentary The Search for Robert Johnson by John Hammond Jr., and a 1997 documentary, Can’t You Hear the Wind Howl, the Life and Music of Robert Johnson, which included reconstructed scenes with Keb’ Mo’ as Johnson, were attempts to document his life, and demonstrated the difficulties arising from the scant historical record and conflicting oral accounts.

Johnson was inducted into the Rock and Roll Hall of Fame in its first induction ceremony, in 1986, as an early influence on rock and roll. He was awarded a posthumous Grammy Award in 1991 for The Complete Recordings, a 1990 compilation album. His single “Cross Road Blues” was inducted into the Grammy Hall of Fame in 1998, and he was given a Grammy Lifetime Achievement Award in 2006. In 2003, David Fricke ranked Johnson fifth in Rolling Stone magazine’s “100 Greatest Guitarists of All Time”.

Johnson is considered a master of the blues, particularly of the Delta blues style. Keith Richards, of the Rolling Stones, said in 1990, “You want to know how good the blues can get? Well, this is it”. But according to Elijah Wald, in his book Escaping the Delta, Johnson in his own time was most respected for his ability to play in a wide range of styles, from raw country slide guitar to jazz and pop licks, and for his ability to pick up guitar parts almost instantly upon hearing a song. His first recorded song, “Kind Hearted Woman Blues”, in contrast to the prevailing Delta style of the time, more resembled the style of Chicago or St. Louis, with “a full-fledged, abundantly varied musical arrangement”. Unusual for a Delta player of the time, a recording exhibits what Johnson could do entirely outside of a blues style. “They’re Red Hot”, from his first recording session, shows that he was also comfortable with an “uptown” swing or ragtime sound similar to that of the Harlem Hamfats, but as Wald remarked, “no record company was heading to Mississippi in search of a down-home Ink Spots … [H]e could undoubtedly have come up with a lot more songs in this style if the producers had wanted them.”

To the uninitiated, Johnson’s recordings may sound like just another dusty Delta blues musician wailing away. But a careful listen reveals that Johnson was a revisionist in his time … Johnson’s tortured soul vocals and anxiety-ridden guitar playing aren’t found in the cotton-field blues of his contemporaries.

An important aspect of Johnson’s singing was his use of microtonality. These subtle inflections of pitch help explain why his singing conveys such powerful emotion. Eric Clapton described Johnson’s music as “the most powerful cry that I think you can find in the human voice”. In two takes of “Me and the Devil Blues” he shows a high degree of precision in the complex vocal delivery of the last verse: “The range of tone he can pack into a few lines is astonishing.” The song’s “hip humor and sophistication” is often overlooked. “[G]enerations of blues writers in search of wild Delta primitivism”, wrote Wald, have been inclined to overlook or undervalue aspects that show Johnson as a polished professional performer.

Johnson is also known for using the guitar as “the other vocalist in the song”, a technique later perfected by B. B. King and his personified guitar named Lucille: “In Africa and in Afro-American tradition, there is the tradition of the talking instrument, beginning with the drums … the one-strand and then the six-strings with bottleneck-style performance; it becomes a competing voice … or a complementary voice … in the performance.”

When Johnson started singing, he seemed like a guy who could have sprung from the head of Zeus in full armor. I immediately differentiated between him and anyone else I had ever heard. The songs weren’t customary blues songs. They were so utterly fluid. At first they went by quick, too quick to even get. They jumped all over the place in range and subject matter, short punchy verses that resulted in some panoramic story-fires of mankind blasting off the surface of this spinning piece of plastic.

Johnson mastered the guitar, being considered today one of the all-time greats on the instrument. His approach was complex and musically advanced. When Keith Richards was first introduced to Johnson’s music by his bandmate Brian Jones, he asked, “Who is the other guy playing with him?”, not realizing it was Johnson playing one guitar. “I was hearing two guitars, and it took a long time to actually realise he was doing it all by himself”, said Richards, who later stated that “Robert Johnson was like an orchestra all by himself”. “As for his guitar technique, it’s politely reedy but ambitiously eclectic—moving effortlessly from hen-picking and bottleneck slides to a full deck of chucka-chucka rhythm figures.”

In The Story with Dick Gordon, Bill Ferris, of American Public Media, said, “Robert Johnson I think of in the same way I think of the British Romantic poets, Keats and Shelley, who burned out early, who were geniuses at wordsmithing poetry … The Blues, if anything, are deeply sexual. You know, ‘my car doesn’t run, I’m gonna check my oil’ … ‘if you don’t like my apples, don’t shake my tree’. Every verse has sexuality associated with it.”

In The Guardian‘s music blog from May 2010, Jon Wilde speculated without proof that Johnson’s recordings may have been “accidentally speeded up when first committed to 78 [rpm records], or else were deliberately speeded up to make them sound more exciting”. He did not give a source for this statement. Biographer Elijah Wald and other musicologists dispute this hypothesis on various grounds, including that Johnson’s extant recordings were made on five different days, spread across two years at two different studios, making uniform speed changes or malfunctions highly improbable. In addition, fellow musicians, contemporaries and family who worked with or witnessed Johnson perform spoke of his recordings for more than 70 years preceding Wilde’s hypothesis without ever suggesting that the speed of his performances had been altered.

Johnson fused approaches specific to Delta blues to those from the broader music world. The slide guitar work on “Rambling on My Mind” is pure Delta and Johnson’s vocal there has “a touch of … Son House rawness”, but the train imitation on the bridge is not at all typical of Delta blues—it is more like something out of minstrel show music or vaudeville. Johnson did record versions of “Preaching the Blues” and “Walking Blues” in the older bluesman’s vocal and guitar style (House’s chronology has been questioned by Guralnick). As with the first take of “Come On in My Kitchen”, the influence of Skip James is evident in James’s “Devil Got My Woman”, but the lyrics rise to the level of first-rate poetry, and Johnson sings with a strained voice found nowhere else in his recorded output.

The sad, romantic “Love in Vain” successfully blends several of Johnson’s disparate influences. The form, including the wordless last verse, follows Leroy Carr’s last hit “When the Sun Goes Down”; the words of the last sung verse come directly from a song Blind Lemon Jefferson recorded in 1926. Johnson’s last recording, “Milkcow’s Calf Blues” is his most direct tribute to Kokomo Arnold, who wrote “Milkcow Blues” and influenced Johnson’s vocal style.

“From Four Until Late” shows Johnson’s mastery of a blues style not usually associated with the Delta. He croons the lyrics in a manner reminiscent of Lonnie Johnson, and his guitar style is more that of a ragtime-influenced player like Blind Blake. Lonnie Johnson’s influence is even clearer in two other departures from the usual Delta style: “Malted Milk” and “Drunken Hearted Man”. Both copy the arrangement of Lonnie Johnson’s “Life Saver Blues”. The two takes of “Me and the Devil Blues” show the influence of Peetie Wheatstraw, calling into question the interpretation of this piece as “the spontaneous heart-cry of a demon-driven folk artist”.

Hellhound on my trail by Robert Johnson

Robert Johnson – Come on in my Kitchen