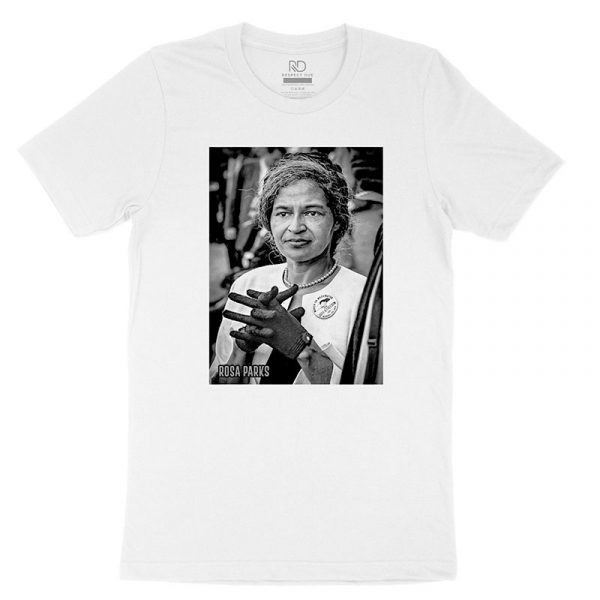 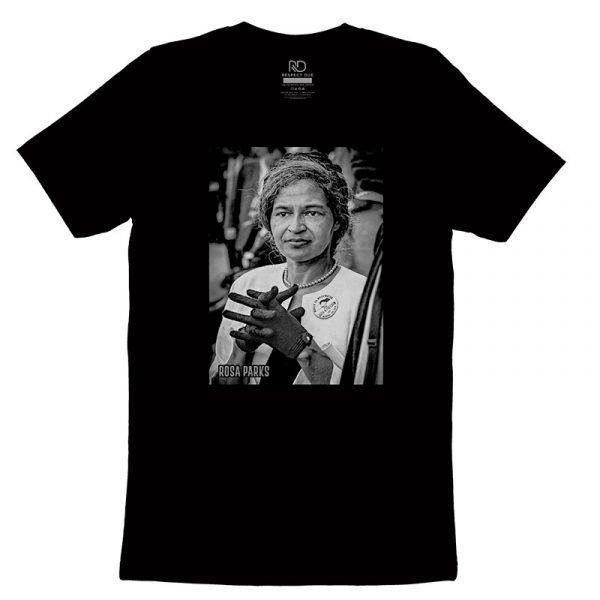 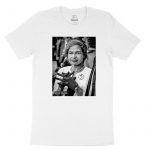 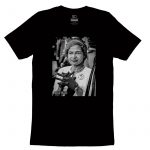 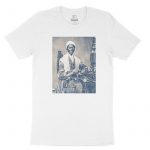 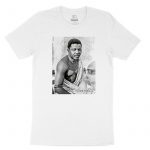 Nelson Mandela Unisex T-Shirt
0 out of 5
( There are no reviews yet. )

Welcome to the Respect Due family Rosa Parks! We salute you.

Rosa Louise McCauley Parks (February 4, 1913 – October 24, 2005) was an American activist in the civil rights movement best known for her pivotal role in the Montgomery bus boycott. The United States Congress has called her “the first lady of civil rights” and “the mother of the freedom movement”.

On December 1, 1955, in Montgomery, Alabama, Parks rejected bus driver James F. Blake‘s order to vacate a row of four seats in the “colored” section in favor of a white passenger, once the “white” section was filled. Parks wasn’t the first person to resist bus segregation, but the National Association for the Advancement of Colored People (NAACP) believed that she was the best candidate for seeing through a court challenge after her arrest for civil disobedience in violating Alabama segregation laws, and she helped inspire the black community to boycott the Montgomery buses for over a year. The case became bogged down in the state courts, but the federal Montgomery bus lawsuit Browder v. Gayle resulted in a November 1956 decision that bus segregation is unconstitutional under the Equal Protection Clause of the 14th Amendment to the U.S. Constitution.

Parks’ act of defiance and the Montgomery bus boycott became important symbols of the movement. She became an international icon of resistance to racial segregation, and organized and collaborated with civil rights leaders, including Edgar Nixon and Martin Luther King Jr.. At the time, Parks was employed as a seamstress at a local department store and was secretary of the Montgomery chapter of the NAACP. She had recently attended the Highlander Folk School, a Tennessee center for training activists for workers’ rights and racial equality. Although widely honored in later years, she also suffered for her act; she was fired from her job, and received death threats for years afterwards. Shortly after the boycott, she moved to Detroit, where she briefly found similar work. From 1965 to 1988, she served as secretary and receptionist to John Conyers, an African-American US Representative. She was also active in the Black Power movement and the support of political prisoners in the US.

After retirement, Parks wrote her autobiography and continued to insist that there was more work to be done in the struggle for justice. Parks received national recognition, including the NAACP’s 1979 Spingarn Medal, the Presidential Medal of Freedom, the Congressional Gold Medal, and a posthumous statue in the United States Capitol’s National Statuary Hall. Upon her death in 2005, she was the first woman to lie in honor in the Capitol Rotunda. California and Missouri commemorate Rosa Parks Day on her birthday, February 4, while Ohio and Oregon commemorate the anniversary of her arrest, December 1.

Rosa Parks was born Rosa Louise McCauley in Tuskegee, Alabama, on February 4, 1913, to Leona (née Edwards), a teacher, and James McCauley, a carpenter. In addition to African ancestry, one of Parks’ great-grandfathers was Scots-Irish and one of her great-grandmothers a part-Native American slave. She was small as a child and suffered poor health with chronic tonsillitis. When her parents separated, she moved with her mother to Pine Level, just outside the state capital, Montgomery. She grew up on a farm with her maternal grandparents, mother, and younger brother Sylvester. They all were members of the African Methodist Episcopal Church (AME), a century-old independent black denomination founded by free blacks in Philadelphia, Pennsylvania, in the early nineteenth century.

McCauley attended rural schools until the age of eleven. Before that, her mother taught her “a good deal about sewing.” She started piecing quilts from around the age of six, as her mother and grandmother were making quilts, She put her first quilt together by herself around the age of ten, which was unusual, as quilting was mainly a family activity performed when there was no field work or chores to be done. She learned more sewing in school from the age of eleven; she sewed her own “first dress [she] could wear.” As a student at the Industrial School for Girls in Montgomery, she took academic and vocational courses. Parks went on to a laboratory school set up by the Alabama State Teachers College for Negroes for secondary education, but dropped out in order to care for her grandmother and later her mother, after they became ill.

Around the turn of the 20th century, the former Confederate states had adopted new constitutions and electoral laws that effectively disenfranchised black voters and, in Alabama, many poor white voters as well. Under the white-established Jim Crow laws, passed after Democrats regained control of southern legislatures, racial segregation was imposed in public facilities and retail stores in the South, including public transportation. Bus and train companies enforced seating policies with separate sections for blacks and whites. School bus transportation was unavailable in any form for black schoolchildren in the South, and black education was always underfunded.

Parks recalled going to elementary school in Pine Level, where school buses took white students to their new school and black students had to walk to theirs:

I’d see the bus pass every day … But to me, that was a way of life; we had no choice but to accept what was the custom. The bus was among the first ways I realized there was a black world and a white world.[14]

Although Parks’ autobiography recounts early memories of the kindness of white strangers, she could not ignore the racism of her society. When the Ku Klux Klan marched down the street in front of their house, Parks recalls her grandfather guarding the front door with a shotgun. The Montgomery Industrial School, founded and staffed by white northerners for black children, was burned twice by arsonists. Its faculty was ostracized by the white community.

Repeatedly bullied by white children in her neighborhood, Parks often fought back physically. She later said: “As far back as I remember, I could never think in terms of accepting physical abuse without some form of retaliation if possible.”

In 1932, Rosa married Raymond Parks, a barber from Montgomery. He was a member of the NAACP, which at the time was collecting money to support the defense of the Scottsboro Boys, a group of black men falsely accused of raping two white women. Rosa took numerous jobs, ranging from domestic worker to hospital aide. At her husband’s urging, she finished her high school studies in 1933, at a time when fewer than 7% of African Americans had a high-school diploma.

In December 1943, Parks became active in the civil rights movement, joined the Montgomery chapter of the NAACP, and was elected secretary at a time when this was considered a woman’s job. She later said, “I was the only woman there, and they needed a secretary, and I was too timid to say no.” She continued as secretary until 1957. She worked for the local NAACP leader Edgar Nixon, even though he maintained that “Women don’t need to be nowhere but in the kitchen.” When Parks asked, “Well, what about me?”, he replied: “I need a secretary and you are a good one.”

In 1944, in her capacity as secretary, she investigated the gang-rape of Recy Taylor, a black woman from Abbeville, Alabama. Parks and other civil rights activists organized “The Committee for Equal Justice for Mrs. Recy Taylor”, launching what the Chicago Defender called “the strongest campaign for equal justice to be seen in a decade.”

In the 1940s, Parks and her husband were members of the League of Women Voters. Sometime soon after 1944, she held a brief job at Maxwell Air Force Base, which, despite its location in Montgomery, Alabama, did not permit racial segregation because it was federal property. She rode on its integrated trolley. Speaking to her biographer, Parks noted, “You might just say Maxwell opened my eyes up.” Parks worked as a housekeeper and seamstress for Clifford and Virginia Durr, a white couple. Politically liberal, the Durrs became her friends. They encouraged—and eventually helped sponsor—Parks in the summer of 1955 to attend the Highlander Folk School, an education center for activism in workers’ rights and racial equality in Monteagle, Tennessee. There Parks was mentored by the veteran organizer Septima Clark. In 1945, despite the Jim Crow laws and discrimination by registrars, she succeeded in registering to vote on her third try.

In August 1955, black teenager Emmett Till was brutally murdered after reportedly flirting with a young white woman while visiting relatives in Mississippi. On November 27, 1955, four days before she would make her stand on the bus, Rosa Parks attended a mass meeting at Dexter Avenue Baptist Church in Montgomery that addressed this case, as well as the recent murders of the activists George W. Lee and Lamar Smith. The featured speaker was T. R. M. Howard, a black civil rights leader from Mississippi who headed the Regional Council of Negro Leadership. Howard brought news of the recent acquittal of the two men who had murdered Till. Parks was deeply saddened and angry at the news, particularly because Till’s case had garnered much more attention than any of the cases she and the Montgomery NAACP had worked on—and yet, the two men still walked free.

Rosa Parks biography: In her own words