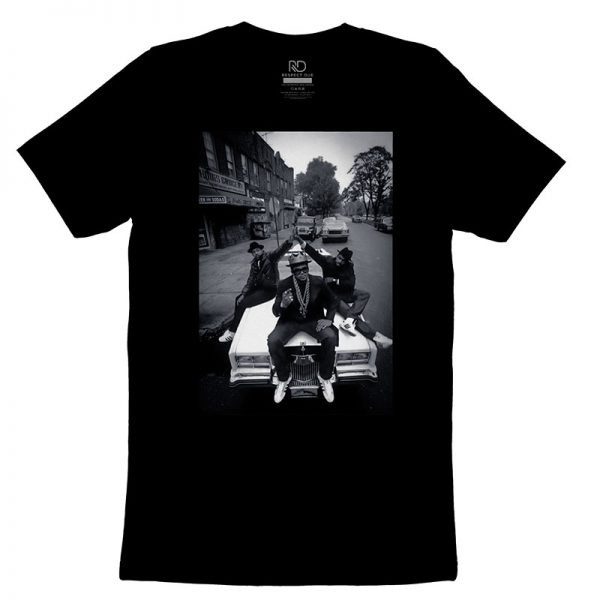 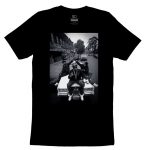 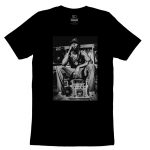 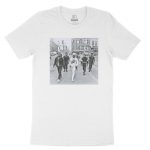 Public Enemy Unisex T-Shirt
0 out of 5
( There are no reviews yet. )

Welcome to the Respect Due family RUN DMC! We salute you.

Run-DMC was an American hip hop group from Hollis, Queens, New York, founded in 1983 by Joseph Simmons, Darryl McDaniels, and Jason Mizell. Run-DMC is regarded as one of the most influential acts in the history of hip hop culture and one of the most famous hip hop acts of the 1980s. Along with LL Cool J, the Beastie Boys, and Public Enemy, the group pioneered new school hip hop music. The group was among the first to highlight the importance of the MC and DJ relationship.

With the release Run–D.M.C. (1984), Run-DMC became the first hip hop group to achieve a Gold record. Run-D.M.C. was followed with the certified Platinum record King of Rock (1985), making Run-DMC the first hip hop to achieve this. Raising Hell (1986) became the first multi-platinum hip hop record. Run-DMC’s cover of “Walk This Way“, featuring Steven Tyler and Joe Perry, charted higher on the Billboard Hot 100 than Aerosmith‘s original version, peaking at number four. It became one of the best known songs in both hip hop and rock. Run-DMC was the first hip hop act to have their music videos broadcast on MTV, appear on American Bandstand, be on the cover of Rolling Stone, perform at Live Aid and be nominated for a Grammy Award.

In 2004, Rolling Stone ranked Run-DMC at number 48 in its list of the 100 Greatest Artists of All Time. In 2007, they were named The Greatest Hip Hop Group of All Time by MTV and Greatest Hip Hop Artist of All Time by VH1. In 2009, Run-DMC became the second hip hop group to be inducted into the Rock and Roll Hall of Fame. In 2016, the group received the Grammy Lifetime Achievement Award. In 2018, Raising Hell was inducted into the National Recording Registry by the Library of Congress as being “culturally, historically, or artistically significant”.

The three members of Run-DMC grew up in Hollis, Queens. As a teenager, Joseph Simmons was recruited into hip hop by his older brother, Russell, who was then an up-and-coming hip hop promoter. Simmons appeared onstage as a DJ for solo rapper Kurtis Blow, who was managed by Russell. Known as “DJ Run, Son of Kurtis Blow”, Simmons soon began performing with Kurtis Blow. Previously, McDaniels had been more focused on athletics than music, but soon began to DJ after purchasing a set of turntables. Simmons convinced McDaniels to start rapping, and though McDaniels would not perform in public, he soon began writing rhymes and was known as “Easy D.”

Simmons and McDaniels started hanging around Two-Fifths Park in Hollis in the late-1970s, hoping to rap for the local DJs who performed and competed there, and the most popular one known to frequent the park was Jason Mizell, then known as “Jazzy Jase”. Mizell was known for his flashy wardrobe and b-boy attitude, which led to minor legal troubles as a teen. Thereafter, he decided to pursue music fame and began entertaining in the park soon after. Eventually, Simmons and McDaniels rapped in front of Mizell at the park, and the three became friends. Following Russell’s success managing Kurtis Blow, he helped Run record his first single, a song called “Street Kid.” The song went unnoticed, but despite the single’s failure, Run’s enthusiasm for hip hop was growing. Simmons soon wanted to record again—-this time with McDaniels, but Russell refused, citing a dislike for D’s rhyming style. After they graduated from high school and started college in 1982, Simmons and McDaniels finally convinced Russell to let them record as a duo, and they recruited Mizell (who was now known as Jam Master Jay) to be their official DJ. The following year, in 1983, Russell agreed to help them record a new single and land a record deal, but only after he changed McDaniels’ stage name to his favourite car company, Delorean Motor Company ‘DMC’ and marketed the group as “Run-D.M.C.”, a name which, incidentally, the group hated at first. DMC said later, “We wanted to be the Dynamic Two, the Treacherous Two — when we heard that shit we was like, ‘We’re gonna be ruined!’ ”

A ticket for a 1984 concert in Oakland, California
After signing with Profile Records, Run-DMC released their debut single “It’s Like That/Sucker MCs”, in late-1983. The single was well received, peaking at #15 on the R&B charts. The trio performed the single on the New York Hot Tracks video show in 1983. Emboldened by their success, Run-DMC released their eponymous debut album Run-D.M.C. in 1984. Hit singles such as “Jam-Master Jay” and “Hard Times” proved that the group were more than a one-hit wonder, and the landmark single “Rock Box” was a groundbreaking fusion of raw hip hop and hard rock that would become a cornerstone of the group’s sound and paved the way for the rap rock subgenre movement of the 1990s.

Run-DMC’s swift ascension to the forefront of rap with a new sound and style meant that old-school hip hop artists were becoming outdated. Along with pushing rap into a new direction musically, Run-DMC changed the entire aesthetic of hip hop music and culture. Old school rappers like Afrika Bambaataa and Melle Mel of Grandmaster Flash and the Furious Five tended to dress in the flashy attire that was commonly attributed to glam rock and disco acts of the era: tight leather, chest-baring shirts, gloves and hats with rhinestones and spikes, leather boots, etc. Run-DMC discarded the more glam aspects of early hip hop fashion (which were later readopted in 1990 by more “pop” rappers like MC Hammer and Vanilla Ice) and incorporated a more “street” sense of style such as Kangol hats, leather jackets, and unlaced Adidas shoes. The group’s look had been heavily influenced by Mizell’s own personal style. When Russell Simmons saw Jay’s flashy, yet street b-boy style; he insisted the entire group follow suit. Run said later:

“ There were guys that wore hats like those and sneakers with no shoestrings. It was a very street thing to wear, extremely rough. They couldn’t wear shoelaces in jail and we took it as a fashion statement. The reason they couldn’t have shoelaces in jail was that they might hang themselves. That’s why DMC says ‘My Adidas only bring good news and they are not used as felon shoes.’ ”
That embrace of the look and style of the street would define the next 25 years of hip hop fashion.