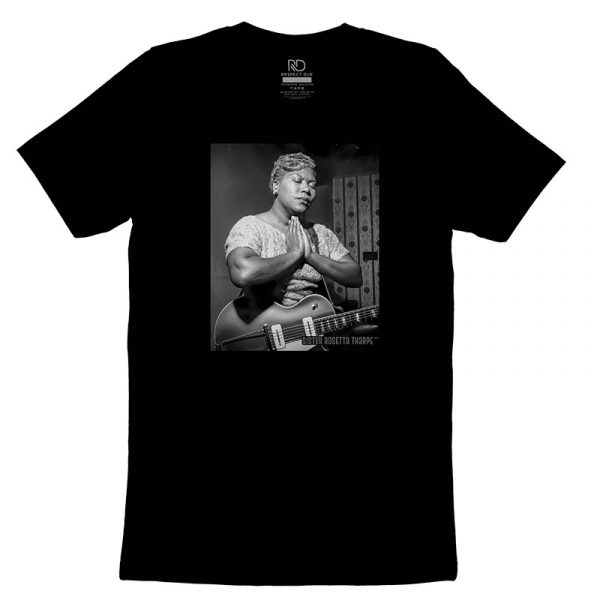 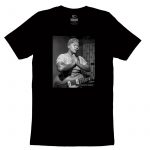 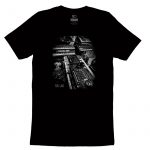 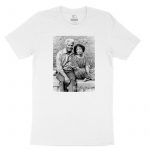 Ruby Dee and Ossie Davis Unisex T-Shirt
0 out of 5
( There are no reviews yet. )

Welcome to the Respect Due family Sister Rosetta Tharpe! We salute you.

Sister Rosetta Tharpe (March 20, 1915 – October 9, 1973) was an American singer, songwriter, guitarist, and recording artist. She attained popularity in the 1930s and 1940s with her gospel recordings, characterized by a unique mixture of spiritual lyrics and electric guitar that was extremely important to the origins of rock and roll. She was the first great recording star of gospel music and among the first gospel musicians to appeal to rhythm-and-blues and rock-and-roll audiences, later being referred to as “the original soul sister” and “the Godmother of rock and roll”. She influenced early rock-and-roll musicians, including Little Richard, Johnny Cash, Carl Perkins, Chuck Berry, Elvis Presley and Jerry Lee Lewis.

Tharpe was a pioneer in her guitar technique; she was among the first popular recording artists to use heavy distortion on her electric guitar, presaging the rise of electric blues. Her guitar playing technique had a profound influence on the development of British blues in the 1960s; in particular a European tour with Muddy Waters in 1964 with a stop in Manchester on 7 May is cited by prominent British guitarists such as Eric Clapton, Jeff Beck, and Keith Richards.

Willing to cross the line between sacred and secular by performing her music of “light” in the “darkness” of nightclubs and concert halls with big bands behind her, Tharpe pushed spiritual music into the mainstream and helped pioneer the rise of pop-gospel, beginning in 1938 with the recording “Rock Me” and with her 1939 hit “This Train“. Her unique music left a lasting mark on more conventional gospel artists such as Ira Tucker, Sr., of the Dixie Hummingbirds. While she offended some conservative churchgoers with her forays into the pop world, she never left gospel music.

Tharpe’s 1944 release “Down by the Riverside” was selected for the National Recording Registry of the U.S. Library of Congress in 2004, which noted that it “captures her spirited guitar playing and unique vocal style, demonstrating clearly her influence on early rhythm-and-blues performers” and cited her influence on “many gospel, jazz, and rock artists”. (“Down by the Riverside” was recorded by Tharpe on December 2, 1948, in New York City, and issued as Decca single 48106.) Her 1945 hit “Strange Things Happening Every Day“, recorded in late 1944, featured Tharpe’s vocals and electric guitar, with Sammy Price (piano), bass and drums. It was the first gospel record to cross over, hitting no. 2 on the Billboard “race records” chart, the term then used for what later became the R&B chart, in April 1945. The recording has been cited as a precursor of rock and roll, and alternatively has been called the first rock and roll record. In May 2018, Tharpe was inducted into the Rock and Roll Hall of Fame as an Early Influence.

Tharpe was born on March 20, 1915, as Rosetta Nubin in Cotton Plant, Arkansas, to Katie Bell Nubin and Willis Atkins, who were cotton pickers. However, researchers Bob Eagle and Eric LeBlanc give her birth name as Rosether Atkins (or Atkinson), her mother’s name being Katie Harper. Little is known of her father except that he was a singer. Tharpe’s mother Katie was also a singer and a mandolin player, deaconess-missionary, and women’s speaker for the Church of God in Christ (COGIC), which was founded in 1894 by Charles Harrison Mason, a black Pentecostal bishop, who encouraged rhythmic musical expression, dancing in praise and allowing women to sing and teach in church. Encouraged by her mother, Tharpe began singing and playing the guitar as Little Rosetta Nubin at the age of four and was cited as a musical prodigy.

About 1921, at age six, Tharpe had joined her mother as a regular performer in a traveling evangelical troupe. Billed as a “singing and guitar playing miracle,” she accompanied her mother in performances that were part sermon and part gospel concert before audiences across the American South. In the mid-1920s, Tharpe and her mother settled in Chicago, Illinois, where they performed religious concerts at the Roberts Temple COGIC on 40th Street, occasionally traveling to perform at church conventions throughout the country. Tharpe developed considerable fame as a musical prodigy, standing out in an era when prominent black female guitarists were rare. In 1934, at age 19, she married Thomas Thorpe, a COGIC preacher, who accompanied her and her mother on many of their tours. The marriage lasted only a few years, but she decided to adopt a version of her husband’s surname as her stage name, Sister Rosetta Tharpe. In 1938, she left her husband and moved with her mother to New York City. Although she married several times, she performed as Rosetta Tharpe for the rest of her life. 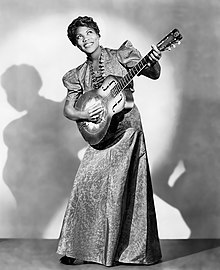 On October 31, 1938, aged 23, Tharpe recorded for the first time – four sides for Decca Records backed by Lucky Millinder‘s jazz orchestra. The first gospel songs recorded by Decca, “Rock Me”, “That’s All“, “My Man and I” and “The Lonesome Road“, were instant hits, establishing Tharpe as an overnight sensation and one of the first commercially successful gospel recording artists. “Rock Me” influenced many rock-and-roll singers, such as Elvis Presley, Little Richard and Jerry Lee Lewis. In 1942, the music critic Maurie Orodenker, describing Tharpe’s “Rock Me”, wrote “It’s Sister Rosetta Tharpe for the rock & roll spiritual singing.”

She had signed a seven-year contract with Millinder. Her records caused an immediate furor: many churchgoers were shocked by the mixture of gospel-based lyrics and secular-sounding music, but secular audiences loved them. Tharpe played on several occasions with the white singing group the Jordanaires.

Tharpe’s appearances with Cab Calloway at Harlem‘s Cotton Club in October 1938 and in John Hammond‘s “Spirituals to Swing” concert at Carnegie Hall on December 23, 1938, gained her more fame, along with notoriety. Performing gospel music for secular nightclub audiences and alongside blues and jazz musicians and dancers was unusual, and in conservative religious circles a woman playing the guitar in such settings was frowned upon. Tharpe fell out of favor with segments of the gospel community.

By 1943 she considered rebuilding a strictly gospel act, but she was contractually required to perform more worldly material. Her nightclub performances, in which she would sometimes sing gospel songs amid scantily clad showgirls, caused her to be shunned by some in the gospel community.

During this time masculinity was directly linked to guitar skills. Tharpe was often offered the compliment that she could “play like a man”, demonstrating her skills at guitar battles at the Apollo.

Tharpe continued recording during World War II, one of only two gospel artists able to record V-discs for troops overseas.

Her song “Strange Things Happening Every Day“, recorded in 1944 with Sammy Price, Decca’s house boogie woogie pianist, showcased her virtuosity as a guitarist and her witty lyrics and delivery. It was the first gospel song to appear on the Billboard magazine Harlem Hit Parade. This 1944 record has been called the first rock and roll record. Tharpe toured throughout the 1940s, backed by various gospel quartets, including the Dixie Hummingbirds.

In 1946, Tharpe saw Marie Knight perform at a Mahalia Jackson concert in New York. Tharpe recognized a special talent in Knight. Two weeks later, Tharpe showed up at Knight’s doorstep, inviting her to go on the road. They toured the gospel circuit for a number of years, during which they recorded hits such as “Up Above My Head” and “Gospel Train”. Though dismissed by both artists as gossip, several in the Gospel community speculated that Knight and Tharpe maintained a romantic and sexual relationship.

Starting in 1949, their popularity took a sudden downturn. Mahalia Jackson was starting to eclipse Tharpe in popularity, and Knight harbored a desire to break free as a solo act into popular music. Furthermore, around this time, Knight lost her children and mother in a house-fire. That same year, to commemorate Tharpe’s first anniversary of being a homeowner in Richmond, Virginia, Tharpe put on a concert at what is now the Altria Theater. Supporting her for that concert were the Twilight Singers, whom Rosetta adopted as her background singers for future concerts, renaming them The Rosettes.

Tharpe attracted 25,000 paying customers to her wedding to her manager, Russell Morrison (her third marriage), followed by a vocal performance at Griffith Stadium in Washington, D.C., in 1951. In 1956, Tharpe recorded an album with the gospel quartet The Harmonizing Four, titled Gospel Train. In 1957, Tharpe was booked for a month-long tour of the UK by British trombonist Chris Barber.

In April and May 1964, Tharpe toured Europe as part of the Blues and Gospel Caravan, alongside Muddy Waters and Otis Spann, Ransom Knowling and Little Willie Smith, Reverend Gary Davis, Cousin Joe, Sonny Terry and Brownie McGhee. Tharpe was introduced on stage and accompanied on piano by Cousin Joe Pleasant. Under the auspices of George Wein, the Caravan was stage-managed by Joe Boyd. A concert, in the rain, was recorded by Granada Television at the disused railway station at Wilbraham Road, Manchester, in May 1964. The band performed on one platform while the audience was seated on the opposite platform.