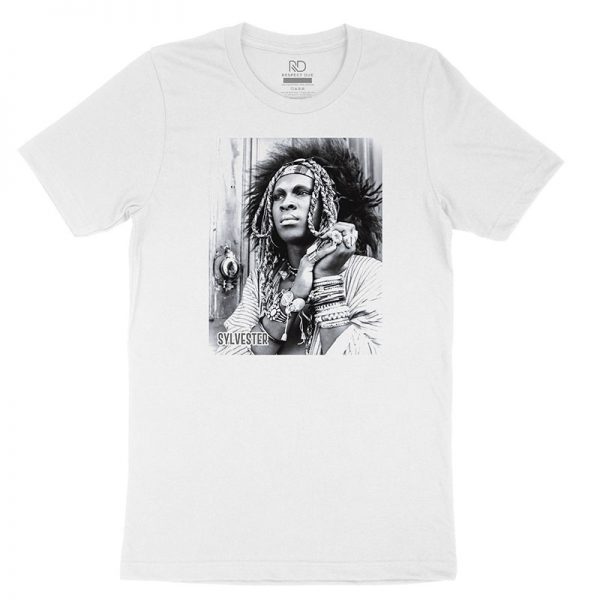 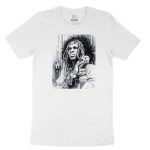 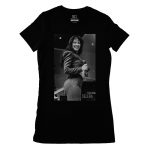 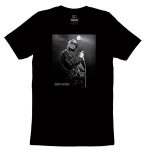 Bobby Womack Unisex T-Shirt
0 out of 5
( There are no reviews yet. )

Welcome to the Respect Due family Sylvester! We salute you.

Love Me Like You Should: The Brave and Bold Sylvester

Sylvester James Jr. (September 6, 1947 – December 16, 1988), known mononymously as Sylvester, was an American singer-songwriter. Primarily active in the genres of disco, rhythm and blues, and soul, he was known for his flamboyant and androgynous appearance, falsetto singing voice, and hit disco singles in the late 1970s and 1980s.

Born in Watts, Los Angeles, to a middle-class African-American family, Sylvester developed a love of singing through the gospel choir of his Pentecostal church. Leaving the church after the congregation expressed disapproval of his homosexuality, he found friendship among a group of black cross-dressers and transgender women who called themselves The Disquotays. Moving to San Francisco in 1970 at the age of 22, Sylvester embraced the counterculture and joined the avant-garde drag troupe The Cockettes, producing solo segments of their shows which were heavily influenced by female blues and jazz singers like Billie Holiday and Josephine Baker. During the Cockettes’ critically panned tour of New York City, Sylvester left them to pursue his career elsewhere. He came to front Sylvester and his Hot Band, a rock act that released two commercially unsuccessful albums on Blue Thumb Records in 1973 before disbanding.

Focusing on a solo career, Sylvester signed a recording contract with Harvey Fuqua of Fantasy Records and obtained three new backing singers in the form of Martha Wash and Izora Rhodes – the “Two Tons O’ Fun” – as well as Jeanie Tracy. His first solo album, Sylvester (1977), was a moderate success. This was followed with the acclaimed disco album Step II (1978), which spawned the singles “You Make Me Feel (Mighty Real)” and “Dance (Disco Heat)“, both of which were hits in the U.S. and Europe. Distancing himself from the disco genre, he recorded four more albums – including a live album – with Fantasy Records. After leaving this label, he signed to Megatone Records, the dance-oriented company founded by friend and collaborator Patrick Cowley, where he recorded four more albums, including the Cowley penned hit Hi-NRG track “Do Ya Wanna Funk.” An activist who campaigned against the spread of HIV/AIDS, Sylvester died from complications arising from the virus in 1988, leaving all future royalties from his work to San Francisco-based HIV/AIDS charities.

During the late 1970s, Sylvester gained the moniker of the “Queen of Disco” and during his life he attained particular recognition in San Francisco, where he was awarded the key to the city. In 2005, he was posthumously inducted into the Dance Music Hall of Fame, while his life has been recorded in a biography and made the subject of both a documentary and a musical.

During the late 1970s, Sylvester gained the moniker of the “Queen of Disco”, a term that continued to be given to the singer into the 21st century. The English journalist Stephen Brogan later described him as “a star who shined brightly. He only happened once. He was a radical and a visionary in terms of queerness, music and race.” Reynaldo Anderson of Harris-Stowe State University described Sylvester’s influence upon disco and subsequent electronic dance music as “incalculable”. He added that Sylvester’s songs “Dance (Disco Heat)”, “You Make Me Feel (Mighty Real)”, and “Do You Wanna Funk” represented “anthems of disco aficionados for a generation”, while also expressing the view that Sylvester himself “personified the excesses of the 1970s and the experimentation that characterized [the decade’s] changing social norms” within the United States.

Shapiro cited Sylvester alongside other artists like Wendy Carlos, Throbbing Gristle, and Terre Thaemlitz as an individual who used electronic music as “a vehicle to express sexual transgression”, while in her study of the use of falsetto in disco, Anne-Lise François believed that Sylvester’s style of singing “makes the point most obviously about falsetto as a gender-bending device.” The cultural studies scholar Tim Lawrence stated that Sylvester embodied “the [disco] movement’s gay roots”, and in doing could be contrasted with John Travolta, who embodied “its commercialization and suburbanization”. The two figures thus reflected a divide between the gay and straight interpretations and presentations of disco music. Layli Philips and Marla R. Stewart compared Sylvester to both Willi Ninja and RuPaul as pop icons who exhibited “male femininity” within the “Black male diva (or ‘queen’) tradition”.

In his will, Sylvester had declared that royalties from the future sale of this music be devoted to two HIV/AIDS charities, Project Open Hand and the AIDS Emergency Fund. Although Sylvester died deeply in debt as a result of taking advances on his royalties, by the early 1990s this debt had been paid off, and a balance had begun to build up. Roger Gross, the attorney to Sylvester’s manager and the openly gay lawyer who helped him draw up his will, petitioned the probate court to designate the charities as the beneficiaries of Sylvester’s will. The proceeds of $140,000 in accrued royalties were split between the two groups, and they will continue to be paid the royalties in the future.

On September 19, 2005, Sylvester was one of three artists inducted into the Dance Music Hall of Fame, alongside Chic and Gloria Gaynor. In December 2016, Billboard magazine ranked him as the 59th most successful dance artist of all-time.

In 2019, “You Make Me Feel (Mighty Real)” was selected by the Library of Congress for preservation in the National Recording Registry for being “culturally, historically, or aesthetically significant”.

Sylvester (Live) You Are My Friend

Be the first to review “Sylvester Unisex T-Shirt” Cancel reply