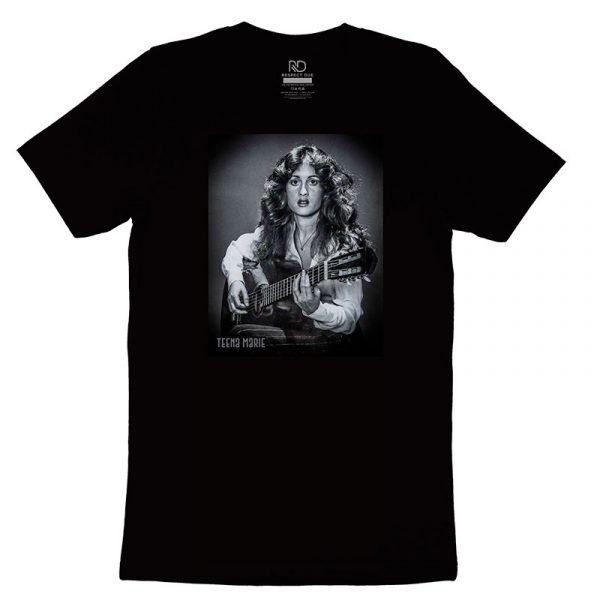 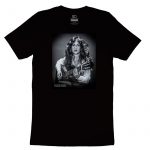 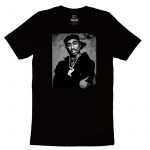 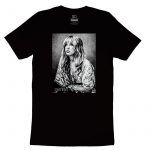 Stevie Nicks Unisex T-Shirt
0 out of 5
( There are no reviews yet. )

Welcome to the Respect Due family Teena Marie! We salute you.

Mary Christine Brockert (March 5, 1956 – December 26, 2010), known professionally as Teena Marie, was an American singer-songwriter, musician, composer, arranger, and producer. She was known by her childhood nickname Tina before taking the stage name Teena Marie and later acquired the nickname Lady Tee (sometimes spelled Lady T), given to her by her collaborator and friend, Rick James.

She was known for her distinctive soprano vocals, which caused many listeners to believe she was black. Her success in R&B and soul music, and loyalty to these genres would earn her the title Ivory Queen of Soul. She played rhythm guitar, keyboards, and congas. Teena Marie was a three-time Grammy Award nominee.

In 1976, Brockert (as the lead singer of a band she had assembled, which included long-time friend Mickey Boyce) gained an introduction to Motown Records staff producer Hal Davis (best known for his work with Brenda Holloway and the Jackson 5). It led to an audition for a film about orphans that was being developed by Motown. The project was shelved, but label boss Berry Gordy, impressed with her singing but having no need for a musical group, decided to sign her as a solo act. Tina recorded unreleased material with a number of different producers over the next few years, before being spotted by labelmate Rick James, who was immediately impressed with her sound. Some of Tina’s earlier, unreleased material has since been made available on the compilation album First Class Love: Rare Tee. At the time, James, already established as a successful recording artist, was on tap to produce for Diana Ross but changed his mind and decided to work with Brockert, instead. The result was her debut album release, Wild and Peaceful. The album was, at one point, due to be credited to “Teena Tryson”, but ultimately was put out under “Teena Marie”, the name by which she would be known throughout her remaining career. It scored Teena Marie her first top-ten R&B hit, “I’m a Sucker for Your Love” (#8 R&B Singles Chart), a duet with James. Neither the album nor its packaging had her picture on it, and many radio programmers assumed she was black during the earliest months of her career. This myth was disproved when she performed her debut hit with James on Soul Train in 1979, becoming the show’s first white female guest. (She would appear on the show eight more times, more than any other white act.)

Her second album, Lady T (1980), featured her portrait on the cover, and is also noted for having production from Richard Rudolph (the widower of R&B singer Minnie Riperton). Teena Marie had asked Berry Gordy to contact Rudolph and secure his input, as Rick James was unavailable, and she felt unprepared to be sole producer of her own material. Rudolph had intended for a song he penned, “Now That I Have You”, for his wife Minnie Riperton, but offered it to Teena Marie for Lady T. Rudolph also co-composed the single “Behind The Groove”, which reached number 21 on the R&B singles chart and No. 6 on the U.K. singles chart in 1980. The song would also be included on the soundtrack of Grand Theft Auto: Vice City on the Fever 105 soundtrack.

Also in 1980, Teena Marie released her third LP, Irons in the Fire, for which she handled most of the writing and production herself, an achievement considered rare at the time for a female artist. The single “I Need Your Lovin'” (#37 Pop, No. 9 R&B Singles) brought Teena Marie her first top 40 hit; it also peaked at No. 28 in the UK chart.

That same year, Teena Marie appeared on James’ album, Street Songs, with the duet “Fire and Desire“. In an interview, Teena Marie said she had a fever at the time yet managed to record her vocals in one take. After the session, she was driven to a hospital. The two would perform the single at the 2004 BET Awards, which would be their last TV appearance with one another, as James died later that year.

Teena Marie continued her success with Motown in 1981, with the release of It Must Be Magic (#2 R&B Albums Chart), her first gold record, which included her then biggest hit on R&B, “Square Biz” (#3 R&B Singles). Other notable tracks include “Portuguese Love” (featuring a brief, uncredited cameo by James, No. 54 R&B Singles), the title track “It Must be Magic” (#30 R&B Singles).

In 1982, Teena Marie got into a heated legal battle with Motown Records over her contract and disagreements about releasing her new material. The lawsuit resulted in “The Brockert Initiative”, which made it illegal for a record company to keep an artist under contract without releasing new material for that artist. In such instances, artists are able to sign and release with another label instead of being held back by an unsupportive one. Teena Marie commented on the law in an LA Times article, saying, “It wasn’t something I set out to do. I just wanted to get away from Motown and have a good life. But it helped a lot of people, like Luther Vandross and the Mary Jane Girls, and a lot of different artists, to be able to get out of their contracts.” She left Motown as the label’s most successful white solo act.

Contacted by Epic Records in the fall of 1982, after expressing dismay over her Motown contract, Teena Marie signed a worldwide deal with the Columbia Records subsidiary that also allowed her to establish her own publishing company, Midnight Magnet. Epic released the concept album Robbery, which featured the hit “Fix It” (#21 R&B), as well as “Shadow Boxing” and “Casanova Brown.” (The latter was one of many tracks Teena Marie would write over the years about her real-life romance with one-time mentor Rick James.

In 1986, Teena Marie released a rock music-influenced concept album titled Emerald City. It was controversial with her established fan base and not as successful as its predecessors. She also recorded the rock-influenced track, “Lead Me On”, co-produced by Giorgio Moroder, for the soundtrack of the box office hit film Top Gun (1986).

In 1988, she returned to R&B and funk, releasing the critically acclaimed album Naked to the World. That album contained the hit “Ooo La La La“, which reached # 1 on the’Billboard‘s Hot R&B/Hip-Hop Singles & Tracks chart.

During the 1990s, Teena Marie’s classic R&B, soul, and funk records were either sampled by hip-hop artists or covered by R&B divas. Teena Marie herself is regarded as something of a pioneer in helping to bring hip-hop to the mainstream by becoming one of the first artists of her time to rap one of her singles—the aforementioned “Square Biz”. In the hip-hop portion of that song, she mentions some of her inspirations: Sarah Vaughan, Johann Sebastian Bach, Shakespeare, Maya Angelou, and Nikki Giovanni. In 1996, the Fugees paid tribute to her by interpolating the chorus of her hit, “Ooo, La, La, La” (1988), into its own “Fu-Gee-La”.

In the fall of 1994, Teena Marie released Passion Play on her independent label, Sarai Records.

Subsequently, Teena Marie devoted most of her time to raising her daughter Alia Rose (who has since adopted the stage name “Rose Le Beau” and is pursuing her own singing career). During the late 1990s, she began working on a new album, titled Black Rain. She was unable to secure a major label deal for the album and did not want to put it out on her own Sarai label, in light of the modest sales of Passion Play. However, a version pressed for promotional purposes was widely bootlegged among fans. This contained the tracks, “The Mackin’ Game”, “I’ll Take the Pressure”, “Baby, I’m Your Fiend”, “My Body’s Hungry”, “Ecstasy”, “I’m on Fire”, “Watcha Got 4 Me”, “Black Rain”, “1999”, “Butterflies”, “Spanish Harlem”, “Blackberry Playa”, “The Perfect Feeling”, and “Rainbow Outro”.

After a 10-year hiatus from the music industry, Teena Marie returned to her musical career by signing with the Classics sub-label of the successful hip-hop label, Cash Money Records. She released her eleventh album, La Doña, in 2004, and follow up Sapphire, in 2006. La Doña became a gold-certified success (and the highest-charting album of her career, peaking at No. 6 on the Billboard 200 chart) on the basis of the Al Green-sampled “I’m Still In Love” (#23 R&B, No. 70 Pop) and a duet with Gerald Levert, “A Rose by Any Other Name”.

The album peaked at No. 24 on the Pop Chart, the release yielded yet another “R&B” Top-40 hit, “Ooh Wee” (#32); it also reunited her (on “God Has Created” and “Cruise Control”) with Smokey Robinson, Teena Marie parted ways with Ca$h Money records after the release of Sapphire.

On September 19, 2008, Teena Marie performed in concert at B.B. King’s Blues Club in New York City. She took this time to play a couple of finished tracks from her upcoming album, Congo Square, and she received a positive response from the crowd. Congo Square was released on June 9, 2009 on Stax/Concord Records. Teena Marie has described the album as “personal and spiritual”, and indicated that it was more jazz-influenced than most of her previous work. “Can’t Last a Day”, a duet with Faith Evans, leaked to the Internet in March 2009. Teena Marie says of Evans, “It was after I had recorded the song (“Can’t Last a Day”) I got the idea to put Faith on it. I’ve always loved Faith and her vocal style. She reminds me of me. Her correlation with Biggie — having a career with him and without him – reminds me of me and Rick. I feel like she’s a younger me. Of the younger ladies, she’s the one I love most.”

Meanwhile, with regard to her early-life inspirations for Congo Square, in January 2010 Teena Marie told Lee Tyler, editor of Blues & Soul magazine: “I wanted to do songs that reflected the things that I loved when I was growing up. Every single song on the record is dedicated to someone, or some musical giant that I loved. ‘The Pressure’ is dedicated to Rick James; ‘Can’t Last a Day’ is dedicated to the Gamble & Huff sound – the Philly International sound’. Then ‘Baby I Love You’ and ‘Ear Candy’ are dedicated to Marvin Gaye and Curtis Mayfield – with memories of riding down Crenshaw in LA in jeeps and bumping to music on the 808 i.e. Roland TR-808 drum machine. While ‘Miss Coretta’ is, of course, dedicated to Mrs. Coretta Scott King, the late wife of Martin Luther King.”

Sales-wise, the album proved another success, reaching the Top 20 on Billboard’s Top 200, and giving Teena Marie yet another Top 10 R&B chart entry. In 2010, Teena Marie continued to be a headliner on the Las Vegas Strip, appearing regularly at the Las Vegas Hilton and other venues until just before her death.

At the time of her death, Teena Marie had been in the process of completing her 14th album, Beautiful. It was finished posthumously by her daughter, Alia Rose, and released on January 15, 2013. A limited edition album was released on July 11, 2011 comprising previously unreleased material unearthed from her Motown days entitled First class love: Rare Tee.