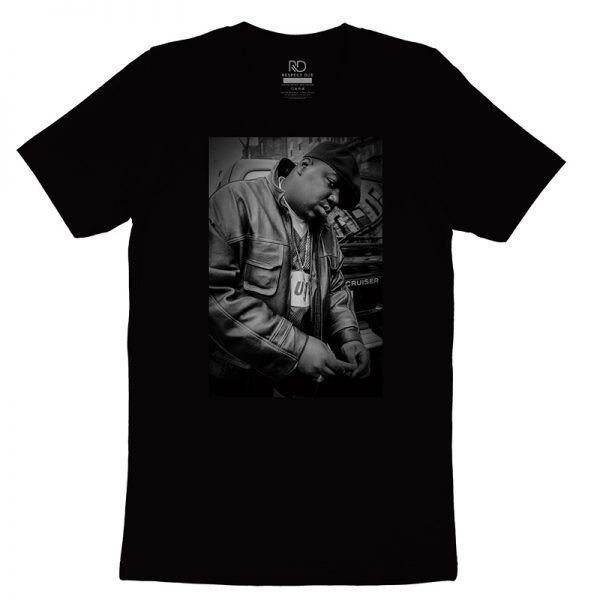 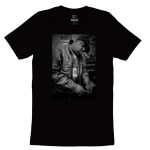 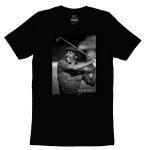 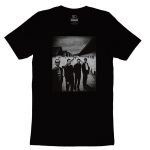 Kraftwerk Unisex T-Shirt
0 out of 5
( There are no reviews yet. )

Welcome to the Respect Due family The Notorious B.I.G.! We salute you.

Christopher George Latore Wallace (May 21, 1972 – March 9, 1997), better known by his stage names The Notorious B.I.G., Biggie Smalls, or simply Biggie, was an American rapper. Rooted in the New York rap scene and gangsta rap traditions, he is considered one of the greatest rappers of all time. The Notorious B.I.G. became known for his distinctive laidback lyrical delivery, offsetting the lyrics’ often grim content and his own intimidating appearance. His music was often semi-autobiographical, telling of hardship and criminality, but also of debauchery and celebration.

Born and raised in Brooklyn, New York City, The Notorious B.I.G. signed to Sean “Puffy” Combs‘ label Bad Boy Records as it launched in 1993, and gained exposure through features on several, other artists’ singles that year. His debut album Ready to Die (1994) was met with widespread critical acclaim, and produced his signature songs “Juicy” and “Big Poppa“. The album made him the central figure in East Coast hip hop, and restored New York’s visibility at a time when the West Coast hip hop scene was dominating hip hop music. The Notorious B.I.G. was awarded the 1995 Billboard Music Awards‘ Rapper of the Year. The following year, he led his protégé group Junior M.A.F.I.A., a team of himself and longtime friends, including Lil’ Kim, to chart success.

During 1996, while recording his second album, The Notorious B.I.G. became ensnarled in the escalating East Coast–West Coast hip hop feud. Following Tupac Shakur’s death in a drive-by shooting in Las Vegas in September 1996, speculations of involvement by criminal elements orbiting the Bad Boy circle circulated. On March 9, 1997, while visiting Los Angeles, Wallace was murdered in a drive-by shooting. The assailant remains unidentified. The Notorious B.I.G.’s sophomore album Life After Death, a double album, was released two weeks later. It reached number one on the Billboard 200, and eventually achieved a Diamond certification in the US.

With three more posthumous albums released, The Notorious B.I.G. has accrued certified sales of over 28 million copies in the United States, including 21 million albums. Rolling Stone has called him the “greatest rapper that ever lived,” and Billboard named him the greatest rapper of all time. The Source magazine named him the greatest rapper of all time in its 150th issue. In 2006, MTV ranked him at No. 3 on their list of The Greatest MCs of All Time, calling him possibly “the most skillful ever on the mic”. In 2020, The Notorious B.I.G. was inducted into the Rock and Roll Hall of Fame.

Wallace mostly rapped on his songs in a deep tone described by Rolling Stone as a “thick, jaunty grumble”, which went deeper on Life After Death. He was often accompanied on songs with ad libs from Sean “Puffy” Combs. In The Source‘s Unsigned Hype column, his style was described as “cool, nasal, and filtered, to bless his own material”.

AllMusic describe Wallace as having “a talent for piling multiple rhymes on top of one another in quick succession”. Time magazine wrote Wallace rapped with an ability to “make multi-syllabic rhymes sound… smooth”, while Krims describes Wallace’s rhythmic style as “effusive.” Before starting a verse, Wallace sometimes used onomatopoeic vocables to “warm up” (for example “uhhh” at the beginning of “Hypnotize” and “Big Poppa”, and “whaat” after certain rhymes in songs such as “My Downfall”).

Lateef of Latyrx notes that Wallace had, “intense and complex flows”, Fredro Starr of Onyx says, “Biggie was a master of the flow”, and Bishop Lamont states that Wallace mastered “all the hemispheres of the music”. He also often used the single-line rhyme scheme to add variety and interest to his flow. Big Daddy Kane suggests that Wallace didn’t need a large vocabulary to impress listeners – “he just put his words together a slick way and it worked real good for him”. Wallace was known to compose lyrics in his head, rather than write them down on paper, in a similar way to Jay-Z.

Wallace would occasionally vary from his usual style. On “Playa Hater” from his second album, he sang in a slow-falsetto. On his collaboration with Bone Thugs-n-Harmony, “Notorious Thugs“, he modified his style to match the rapid rhyme flow of the group.

Guerilla Black, in the book How to Rap, describes how Wallace was able to both “glorify the upper echelon” and “[make] you feel his struggle”. According to Touré of The New York Times in 1994, Wallace’s lyrics “[mixed] autobiographical details about crime and violence with emotional honesty”. Marriott of The New York Times (in 1997) believed his lyrics were not strictly autobiographical and wrote he “had a knack for exaggeration that increased sales”. Wallace described his debut as “a big pie, with each slice indicating a different point in my life involving bitches and niggaz… from the beginning to the end”.

Ready to Die is described by Rolling Stone as a contrast of “bleak” street visions and being “full of high-spirited fun, bringing the pleasure principle back to hip-hop”.[81] AllMusic write of “a sense of doom” in some of his songs and the NY Times note some being “laced with paranoia”; Wallace described himself as feeling “broke and depressed” when he made his debut. The final song on the album, “Suicidal Thoughts“, featured Wallace contemplating suicide and concluded with him committing the act.

On Life After Death, Wallace’s lyrics went “deeper”. Krims explains how upbeat, dance-oriented tracks (which featured less heavily on his debut) alternate with “reality rap” songs on the record and suggests that he was “going pimp” through some of the lyrical topics of the former. XXL magazine wrote that Wallace “revamped his image” through the portrayal of himself between the albums, going from “midlevel hustler” on his debut to “drug lord“.

AllMusic wrote that the success of Ready to Die is “mostly due to Wallace’s skill as a storyteller”; in 1994, Rolling Stone described Wallace’s ability in this technique as painting “a sonic picture so vibrant that you’re transported right to the scene”. On Life After Death, Wallace notably demonstrated this skill on “I Got a Story to Tell”, creating a story as a rap for the first half of the song and then retelling the same story “for his boys” in conversation form.

A stencil of the Notorious B.I.G. in Asakusa, Tokyo

Since his death, Wallace’s lyrics have been sampled and quoted by a variety of hip hop, R&B and pop artists including Jay-Z, 50 Cent, Alicia Keys, Fat Joe, Nelly, Ja Rule, Eminem, Lil Wayne, Game, Clinton Sparks, Michael Jackson and Usher. On August 28, 2005, at the 2005 MTV Video Music Awards, Sean Combs (then using the rap alias “P. Diddy”) and Snoop Dogg paid tribute to Wallace: an orchestra played while the vocals from “Juicy” and “Warning” played on the arena speakers. In September 2005, VH1 held its second annual “Hip Hop Honors”, with a tribute to Wallace headlining the show.

Wallace had begun to promote a clothing line called Brooklyn Mint, which was to produce plus-sized clothing but fell dormant after he died. In 2004, his managers, Mark Pitts and Wayne Barrow, launched the clothing line, with help from Jay-Z, selling T-shirts with images of Wallace on them. A portion of the proceeds go to the Christopher Wallace Foundation and to Jay-Z’s Shawn Carter Scholarship Foundation. In 2005, Voletta Wallace hired branding and licensing agency Wicked Cow Entertainment to guide the estate’s licensing efforts. Wallace-branded products on the market include action figures, blankets, and cell phone content.

The Christopher Wallace Memorial Foundation holds an annual black-tie dinner (“B.I.G. Night Out”) to raise funds for children’s school equipment and to honor Wallace’s memory. For this particular event, because it is a children’s schools’ charity, “B.I.G.” is also said to stand for “Books Instead of Guns”.

There is a large portrait mural of Wallace as Mao Zedong on Fulton Street in Brooklyn a half-mile west from Wallace’s old block. A fan petitioned to have the corner of Fulton Street and St. James Place, near Wallace’s childhood home renamed in his honor, garnering support from local businesses and attracting more than 560 signatures.

A large portrait of Wallace features prominently in the Netflix series Luke Cage, due to the fact that he served as muse for the creation of the Marvel Cinematic Universe‘s version of Marvel Comics character Cornell “Cottonmouth” Stokes.

Be the first to review “The Notorious B.I.G. Unisex T-Shirt” Cancel reply