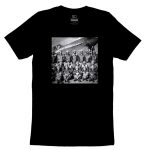 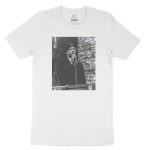 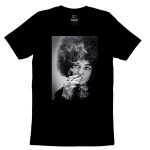 Angela Davis Unisex T-Shirt
0 out of 5
( There are no reviews yet. )

Welcome to the Respect Due family Tuskegee Airmen! We salute you.

The Tuskegee Airmen /tʌsˈkiːɡiː/ were a group of African-American military pilots (fighter and bomber) who fought in World War II. They formed the 332nd Fighter Group and the 477th Bombardment Group of the United States Army Air Forces. The name also applies to the navigators, bombardiers, mechanics, instructors, crew chiefs, nurses, cooks and other support personnel.

All black military pilots who trained in the United States trained at Moton Field, the Tuskegee Army Air Field and were educated at Tuskegee University, located near Tuskegee, Alabama. The group included five Haitians from the Haitian Air Force, and one pilot from Trinidad. It also included a Hispanic or Latino airman born in the Dominican Republic.

Although the 477th Bombardment Group trained with North American B-25 Mitchell bombers, they never served in combat. The 99th Pursuit Squadron (later, 99th Fighter Squadron) was the first black flying squadron, and the first to deploy overseas (to North Africa in April 1943, and later to Sicily and Italy). The 332nd Fighter Group, which originally included the 100th, 301st and 302nd Fighter Squadrons, was the first black flying group. It deployed to Italy in early 1944. In June 1944, the 332nd Fighter Group began flying heavy bomber escort missions and, in July 1944, with the addition of the 99th Fighter Squadron, it had four fighter squadrons.

The 99th Fighter Squadron was initially equipped with Curtiss P-40 Warhawk fighter-bomber aircraft. The 332nd Fighter Group and its 100th, 301st and 302nd Fighter Squadrons were equipped for initial combat missions with Bell P-39 Airacobras (March 1944), later with Republic P-47 Thunderbolts (June–July 1944) and finally with the aircraft with which they became most commonly associated, the North American P-51 Mustang (July 1944). When the pilots of the 332nd Fighter Group painted the tails of their P-47s red, the nickname “Red Tails” was coined. The red markings that distinguished the Tuskegee Airmen included red bands on the noses of P-51s as well as a red rudder; the P-51B and D Mustangs flew with similar color schemes, with red propeller spinners, yellow wing bands and all-red tail surfaces.

The Tuskegee Airmen were the first African-American military aviators in the United States Armed Forces. During World War II, black Americans in many U.S. states were still subject to the Jim Crow laws and the American military was racially segregated, as was much of the federal government. The Tuskegee Airmen were subjected to discrimination, both within and outside the army.

On 11 September 1941, the 99th Pursuit Squadron was activated at Chanute Field in Rantoul, Illinois.

A cadre of 271 enlisted men was trained in aircraft ground support trades at Chanute, beginning in July 1941; the skills being taught were so technical that setting up segregated classes was deemed impossible. This small number of enlisted men became the core of other black squadrons forming at Tuskegee and Maxwell Fields in Alabama.

The Tuskegee program officially began June 1941 with the 99th Pursuit Squadron at Tuskegee University. The unit consisted of 47 officers and 429 enlisted men and was backed by an entire service arm. After primary training at Moton Field, they were moved to the nearby Tuskegee Army Air Field, about 10 miles (16 km) to the west for conversion training onto operational types. Consequently, Tuskegee Army Air Field became the only Army installation performing three phases of pilot training (basic, advanced, and transition) at a single location. Initial planning called for 500 personnel in residence at a time.

By mid-1942, over six times that many were stationed at Tuskegee, even though only two squadrons were training there. 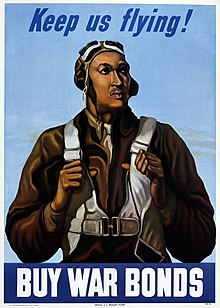 Tuskegee Army Airfield was similar to already-existing airfields reserved for training white pilots, such as Maxwell Field, only 40 miles (64 km) distant. African-American contractor McKissack and McKissack, Inc. was in charge of the contract. The company’s 2,000 workmen, the Alabama Works Progress Administration, and the U.S. Army built the airfield in only six months. The construction was budgeted at $1,663,057. The airmen were placed under the command of Captain Benjamin O. Davis, Jr., one of only two black line officers then serving.

During training, Tuskegee Army Air Field was commanded first by Major James Ellison. Ellison made great progress in organizing the construction of the facilities needed for the military program at Tuskegee. However, he was transferred on 12 January 1942, reputedly because of his insistence that his African-American sentries and Military Police had police authority over local Caucasian civilians.

His successor, Colonel Frederick von Kimble, then oversaw operations at the Tuskegee airfield. Contrary to new Army regulations, Kimble maintained segregation on the field in deference to local customs in the state of Alabama, a policy that was resented by the airmen. Later that year, the Air Corps replaced Kimble. His replacement had been the director of instruction at Tuskegee Army Airfield, Major Noel F. Parrish. Counter to the prevalent racism of the day, Parrish was fair and open-minded and petitioned Washington to allow the Tuskegee Airmen to serve in combat. 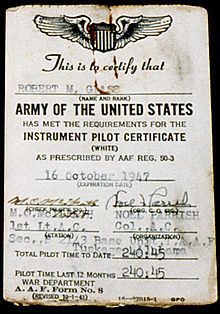 The strict racial segregation the U.S. Army required gave way in the face of the requirements for complex training in technical vocations. Typical of the process was the development of separate African-American flight surgeons to support the operations and training of the Tuskegee Airmen. Before the development of this unit, no U.S. Army flight surgeons had been black.

Training of African-American men as aviation medical examiners was conducted through correspondence courses until 1943, when two black physicians were admitted to the U.S. Army School of Aviation Medicine at Randolph Field, Texas. This was one of the earliest racially integrated courses in the U.S. Army. Seventeen flight surgeons served with the Tuskegee Airmen from 1941-49. At that time, the typical tour of duty for a U.S. Army flight surgeon was four years. Six of these physicians lived under field conditions during operations in North Africa, Sicily, and Italy. The chief flight surgeon to the Tuskegee Airmen was Vance H. Marchbanks, Jr., MD, a childhood friend of Benjamin Davis.

The accumulation of washed-out cadets at Tuskegee and the propensity of other commands to “dump” African-American personnel on the post exacerbated the difficulties of administering Tuskegee. A shortage of jobs for them made these enlisted men a drag on Tuskegee’s housing and culinary departments.

Trained officers were also left idle, as the plan to shift African-American officers into command slots stalled, and white officers not only continued to hold command, but were joined by additional white officers assigned to the post. One rationale behind the non-assignment of trained African-American officers was stated by the commanding officer of the Army Air Forces, General Henry “Hap” Arnold: “Negro pilots cannot be used in our present Air Corps units since this would result in Negro officers serving over white enlisted men creating an impossible social situation.” 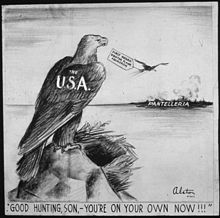 In all, 992 pilots were trained in Tuskegee from 1941–1946. 355 were deployed overseas, and 84 lost their lives. The toll included 68 pilots killed in action or accidents, 12 killed in training and non-combat missions and 32 captured as prisoners of war.

The Tuskegee Airmen were credited by higher commands with the following accomplishments: