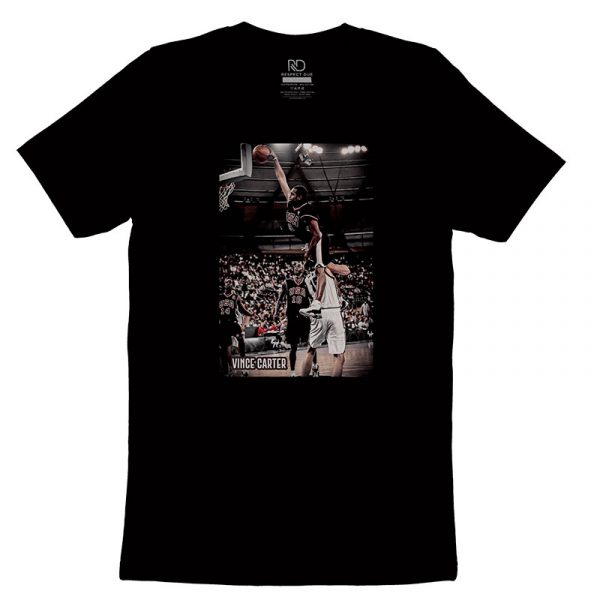 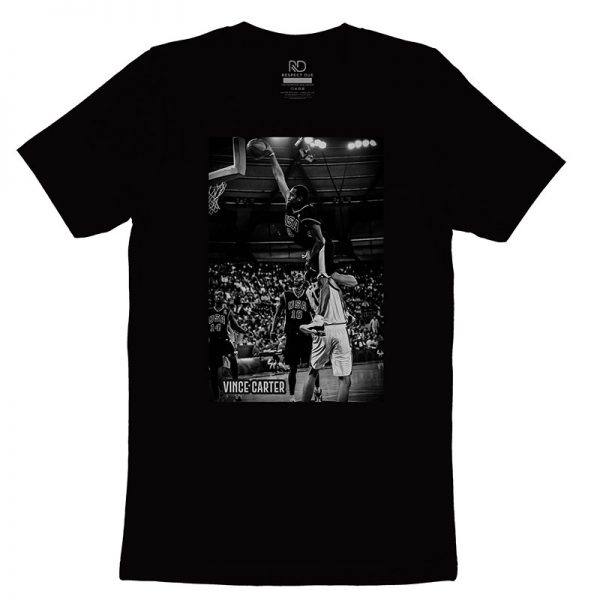 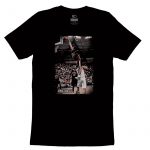 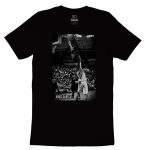 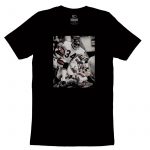 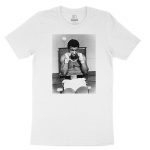 Welcome to the Respect Due family Vince Carter! We salute you.

Vincent Lamar Carter Jr. (born January 26, 1977) is a former American professional basketball player. He is 6 feet 6 inches (1.98 m) tall and played both shooting guard and small forward, but has occasionally played power forward during the later part of his career. Carter is the only player in NBA history to play 22 seasons, and the only player to play in four different decades (1990s, 2000s, 2010s, and 2020s). At 43 years old, he was the last active NBA player to have been born in the 1970s. Carter has been ranked as one of the greatest dunkers of all time.

A high school McDonald’s All-American, Carter played college basketball for three years with the North Carolina Tar Heels and twice advanced to the Final Four of the NCAA Tournament. He was selected with the fifth overall pick in the 1998 NBA draft by the Golden State Warriors, who traded him to the Toronto Raptors.

Carter emerged as a star in Toronto. He won the 1999 NBA Rookie of the Year Award and won the Slam Dunk Contest at the 2000 NBA All-Star Weekend. That summer, he represented the United States in the Summer Olympics, winning a gold medal. He entertained crowds with his leaping ability and slam dunks, earning nicknames such as “Vinsanity”, “Air Canada”, and “Half Man, Half Amazing”. In December 2004, Carter was traded to the New Jersey Nets, where he continued to put up big numbers. Carter has also played for the Orlando Magic, Phoenix Suns, Dallas Mavericks, Memphis Grizzlies, Sacramento Kings, and Atlanta Hawks. He received the Twyman–Stokes Teammate of the Year Award in 2016. Carter is an eight-time NBA All-Star.

Off the court, Carter established the Embassy of Hope Foundation, assisting children and their families in Florida, New Jersey, and Ontario. He was also recognized in 2000 as Child Advocate of the Year by the Children’s Home Society, and he received the Florida Governor’s Points of Light award in 2007 for his philanthropy in his home state.

Born in Daytona Beach, Florida, Carter attended Mainland High School in Daytona Beach. He played football as a quarterback until a broken wrist in his freshman year forced him to pick up volleyball instead. In volleyball, he was named the Volusia County Player of the Year as a junior and averaged 24 kills per match; for comparison, none of his teammates averaged more than one. Carter was also offered a saxophone scholarship to attend Bethune–Cookman.

He led Mainland’s basketball team to its first Class 6A state title in 56 years and was a 1995 McDonald’s All-American. In his senior year he averaged 22 points, 11.4 rebounds, 4.5 assists and 3.5 blocks per game. His career totals at Mainland are 2,299 points, 1,042 rebounds, 356 assists and 178 steals. Carter was contacted by 77 NCAA Division I schools but ultimately chose North Carolina over Florida.

Carter attended the University of North Carolina at Chapel Hill, spending three seasons playing college basketball for the North Carolina Tar Heels under Dean Smith and later Bill Guthridge. During the 1997–98 season, he was a member of new coach Guthridge’s “Six Starters” system that also featured Antawn Jamison, Shammond Williams, Ed Cota, Ademola Okulaja, and Makhtar N’Diaye. During his sophomore and junior seasons, Carter helped North Carolina to consecutive ACC Men’s Basketball Tournament titles and Final Four appearances. He finished the 1997–98 season with a 15.6 points per game average and was named second-team All-American, First-Team All-ACC, and to the fan’s guide third-annual Coaches ACC All-Defensive Team. In May 1998, Carter declared for the 1998 NBA draft, following his classmate Jamison, who had declared earlier that spring. During his NBA career, Carter continued his coursework at North Carolina, and in August 2000, he graduated with a degree in African-American studies.

On January 31, 2012, Carter was honored as one of the 35 greatest McDonald’s All-Americans, and on February 23, 2012, President Barack Obama, an avid basketball fan, gave praise to Carter at a fundraiser event, referring to Carter’s game as a “huge treat for me ever since he’s been playing for the Tar Heels.”

Carter was initially drafted by the Golden State Warriors with the fifth overall pick in the 1998 NBA draft. He was then traded to the Toronto Raptors for the fourth overall pick, Antawn Jamison—Carter’s college teammate and good friend. The Raptors had struggled in their first three years as a franchise. Carter was instrumental in leading the Raptors to their first-ever playoff appearance in 2000 before going on to lead them to a 47-win season and their first ever playoff series win in 2001, advancing them to the Eastern Conference Semifinals.

Due to the NBA lockout, Carter’s rookie season did not start until January 1999. Carter quickly became a fan favorite with a soaring offensive game that earned him the nickname “Air Canada”. He won the NBA Rookie of the Year Award after averaging 18.3 points and throwing down countless highlight-reel dunks. Carter ascended to full-fledged stardom in his second season – he averaged 25.7 points per game (fourth-highest in the league) and lifted Toronto to its first playoff appearance in franchise history. He subsequently earned his first NBA All-Star selection and was named to the All-NBA Third Team. During the 2000 NBA All-Star Weekend, Carter showcased arguably the most memorable Slam Dunk Contest event in its history. He won the contest by performing an array of dunks including a 360° windmill, a between the legs bounce dunk, and an “elbow in the rim” dunk (also known as a “cookie jar” dunk or the “honey dip”). Carter and his distant cousin Tracy McGrady formed a formidable one-two punch as teammates in Toronto between 1998 and 2000. However, McGrady was dealt to the Orlando Magic in August 2000, leaving Carter as the Raptors’ franchise player. 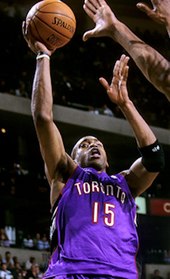 Carter with the Raptors in November 2000

In 2000–01, his third season, Carter averaged a career-high 27.6 points per game, made the All-NBA Second Team, and was voted in as a starter for the 2001 NBA All-Star Game. The Raptors finished the regular season with a then franchise-record 47 wins. In the playoffs, the Raptors beat the New York Knicks 3–2 in the first round and advanced to the Eastern Conference Semifinals to face off against the Philadelphia 76ers. Carter and 76ers star Allen Iverson both dominated in a seven-game series that see-sawed back and forth. Carter scored 50 points in Game 3 and set an NBA playoff record for most three-point field goals made in one game. As the Sixers and Raptors increased their double team pressures on Carter and Iverson respectively, Carter missed a potential game-winning shot with 2.0 seconds remaining. Iverson said of the series in July 2011: “It was incredible. (Carter) had great games at home and I had some great games at home, but both of us were just trying to put our teams on our back and win basketball games. It is great just having those memories and being a part of something like that.”

In August 2001, Carter signed a six-year contract extension worth as much as $94 million. However, Carter began showing the effects of what would become career-altering problems with his knees in the wake of his big contract. He earned a reputation as a fragile player after suffering a series of knee and hamstring injuries.

Carter missed the final 22 games of the 2001–02 regular season due to injury. He started in 60 games and averaged 24.7 points per game. On December 7, 2001, Carter recorded 42 points, 15 rebounds, 6 assists and 5 steals against the Denver Nuggets. He joined Charles Barkley (1988) as just the second player ever to finish a game with 40 points, 15 rebounds, five steals and five assists, dating back to the 1973–74 season, when the league began officially tracking steals. He was voted into the 2002 NBA All-Star Game, but he could not participate due to injury. Without Carter during the 2002 NBA Playoffs, the Raptors were defeated in five games by the Detroit Pistons in the first round.

Following off-season surgery, Carter only managed 43 games during the 2002–03 season. In February 2003, Carter gave up his starting spot in the 2003 NBA All-Star Game to Michael Jordan to allow Jordan to make his final start as an All-Star. Carter played in 73 games during the 2003–04 season, but the Raptors fell three games short of making the playoffs.